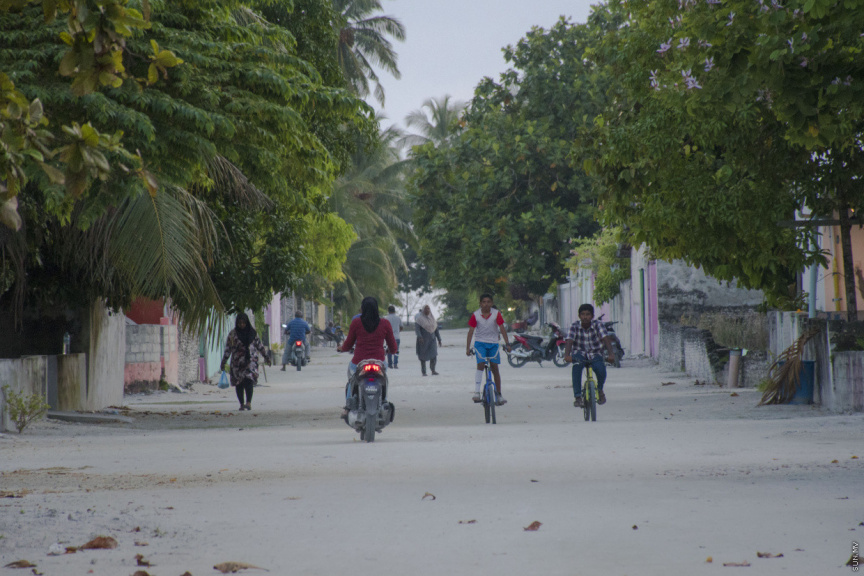 Some residents of G. A Kanduhulhudhoo are seen on the streets of the island going about their business. (Sun Photo/Muzayyin Nazim)

The harrowing tales of abuse were being divulged by the maternal side of the child’s family and was being condemned by Maldivians in every manner. The two accused of the abuse were arrested in addition to the child’s father after public outrage boiled over in the case.

However, all of this was based and came from just one side of the family. Journalists of “Sun” managed to speak to the members of the paternal side of the family in Kanduhulhudhoo, only to hear a contrasting and contradictory version of the events.

These family members were having a hard time imagining that the grandfather and great-grandfather would do such a heinous act with their own granddaughter and stated that it seemed as if the whole case was a ploy and conspiracy against the family.

Mariyam Manike is sister of Kanduhulhudhoo's Imaam Ibrahim Didi (62yrs)--grandfather of the little girl. Didi, who has been suspended from his duties by the Ministry of Islamic Affairs, was arreasted along with his 82-year-old father on Friday on allegations of sexual abuse to his granddaughter.

"My brother [Didi] and his son [victim's father] are being detained unlawfully. This is a plot by them [the maternal family]. They wish to separate the parents and take custody of the child," said Manike, paternal great-aunt of the victim.

Mother of the victim was in a world of abuse, domestic violence and drugs, and was taken to the local health center on two occasions in January due to drug overdose. She was taken to the center on January 13th for a second time, and the abuse inflicted on the child was discovered two days later after she was taken to Thinadhoo on 15th January.

Parents of the child were married without consent of the mother's family, and had been in a lengthy relationship even before marriage.

The victim's maternal family say they took care of the child during daytime while her mother was in treatment, and the child would be later taken by her paternal family in the evening. Manike questioned why the child was repeatedly handed over into an "allegedly" unsafe environment.

Manike asserts that the maternal side was just as responsible of neglect and if not, the whole case is a scheme by them.

Manike spoke highly of her half-brother Didi who is alleged of sexually abusing his granddaughter. She described him as a godly man of religion who prayed five times a day. She also said the Imaam had no such previous records, and thus is innocent.

"He lived within the principles of Islam. We call for his immediate release. This is an unlawful detention," said Manike, tears welling in her eyes by this time. But Didi's neighbors testified that they had seen the man hold, carress and kiss the little girl inappropriately on several occasions.

She also described her nephew, the victim's father, as a loving father who treated his stepsons just as they were his own.

Manike was however reluctant on speaking about the arrested 82-year-old man who happens to be her stepfather. She believed that despite a notorious history of pedophilia and public sexual harrassment towards women and children, he is incapable of committing abuse towards the great-granddaughter.

"I cannot speak for him. His mental faculties and qualities are nearly gone, he is short-sighted and weak, and is ready to be taken to grave now,"

“I cannot speak for the great grandfather, his mental faculties and qualities are nearly gone and he is almost ready to be buried. Those who arrested him will be responsible for his death.” Said Mariyam Manik about an old man who has been accused of harassing several children in Kanduhulhudhoo.

Madeeha Abdulla, another member of the family also maintained innocence of the 82-year-old man.

"He can barely walk and see. He does not know whom he is speaking with most of the time. There were rumors in the past, but I do not think he would do such a thing to my brother's kin," said Madeeha, who also said she believed the victim's maternal family and local media were the reason for the public outrage. She expressed immense displeasure, and described it as "an act of terrorism".

The two-year-old victim herself told the family what was done to her, according to her maternal aunt. The aunt had said that the child kept saying bappa [father--the child referred by this name to her grandfather] was hurting her.

However, Didi's younger sister Madeeha raised doubts on these claims. She claims the child calls at least three men of her maternal family as bappa too, and not only her brother.

"The child calls her maternal grandfather, an uncle and an aunt's husband as bappa. So who was she referring to? What is the proof? Why is only my brother being dragged here?"

Madeeha also claimed that the maternal family took care of the child during the daytime, and they themselves would bring her to ther father's residence in the evening.

"If she was raped by three grown men, would she be running around so joyfully? Would she even be alive? She was released from IGMH after treatment. Would they discharge her if she had been abused so severely?" Madeeha questioned.