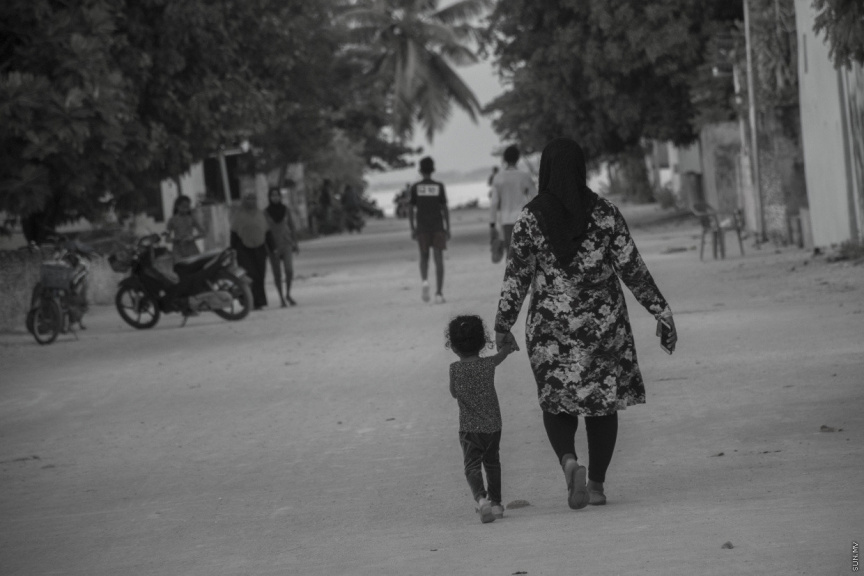 A woman walks with her child on a road in GA. Kanduhulhudhoo -- Muzayyin Nazim/Sun Online

G.A Kanduhulhudhoo – “He would put his hands down the child's diapers, and put her hands inside his sarong. He would lift it up and reveal his genitals to her," a neighbor recalled words of the mother whose two-year-old child fell victim to her own paternal great-grandfather.

The mother was embroiled in a world of drugs and domestic violence herself. The neighbors say she knew her daughter was being molested.

“She [the mother] was ironing when she heard the child loudly crying, and came to see what was happening. This was when she saw the great-grandfather caressing himself with the child's hand. She immediately snatched her child, and threatened the man with murder," told a neighbor.

The mother had seemingly not reported of these constant occurences to the authorities, despite neighbors' repeated advices. They counseled the mother to not leave her infant with the grandfather and great-grandfather. The fear of abuse was so ghastly that the neighbors insisted they look after the child.

But the woman could not give in, as the child's father and paternal grandfather strictly objected to it and would take the infant back immediately.

"She was too scared to leave the child with us because of her husband," said the neighbor.

The mother was hospitalized with drug overdose, and authorities attempted to hand over her young child to a sister (i.e: the child's maternal aunt). This attempt was combatted by the 33 year-old father, who took the child to his house where the family's three generations of fathers resided.

News broke out of the horrific abuse case on Thursday evening, leading to the arrest of three suspects: a young child's three fathers. The paternal great-grandfather (82yrs) and grandfather (62yrs) were arrested from Kanduhulhudhoo on Friday. The latter was arrested on allegation of sexually abusing his two-year-old granddaughter, meanwhile former has an ill-reputed history of sexually harrassing minors.

The third arrest was of the two-year-old's father. He was apprehended from a Hulhumale flat on Friday evening while an angry, violent mob was attempting to break in and enforce vigilante justice. Police say his arrest revolves around objecting the daughter's handover to his sister-in-law and thus placing her in an unsafe environment--his own home.

Allegations of abuse towards own daughters

The 62 year-old Imaam of Kanduhulhudhoo, Ibrahim Didi, has been suspended from duties by the Ministry of Islamic Affairs since his arrest. Neighbors swear they had seem him holding and caressing his own granddaughter inappropriately on multiple occasions.

"Only a lover would kiss like that," the horrified neighbors recounted.

Though the girl's mother--Didi's daughter-in-law--had shared her concerns to the neighbors. they are asserted she is just as much at fault for keeping quiet. If she had reported, the child would not have suffered to this extent, they say. However they believe the mother's silence was imposed.

She had also fallen victim of sexual abuse by her father-in-law. Neighbors say she shared recounts, and they even recall hearing her scream these incidents out of frustration during quarrels which can be clearly heard to the area.

Though these abuses were reported to the police by Didi's own son--the husband--islanders say they eventually fade out with cash handouts.

Villagers describe him a "womanizer" who sexually abused his own kin, leading her to flee the island.

"One night we saw his daughter climb over the wall, and she left. She never came back," a neighbor recalled the incident from 11 years ago. His wife too, eventually moved out of the island and resides in Male City since five years ago.

Little kids overjoyed at the arrest

The 82-year-old great-grandfather is a notorious pedophile, who subjected many young children and women to sexual harassment. Cases were made to the Police Service and Ministry of Gender, but there was nary an outcome.

When confronted on the street, the old man who from time to time flash his genitals in public at little kids, just chuckles and ignores. Islanders describe him shameless and was dissatisfied by continuous harassment in impunity. Some islanders suggest letting the matter go since the old-aged man, and since he had not touched the child.

A second case was however lodged against the elderly man for verbal abuse just last December. But the islanders were shocked to discover the authorities had no records from the 2018 case.

"We tell our kids to not go near him, and not touch or accept money he offer," said a neighbor, recalling the old man's trick of luring kids to cash handouts or sweets.

Islanders say the kids were ecstatic and overjoyed with the man's arrest.

"It was as if the kids observed an Eid,".