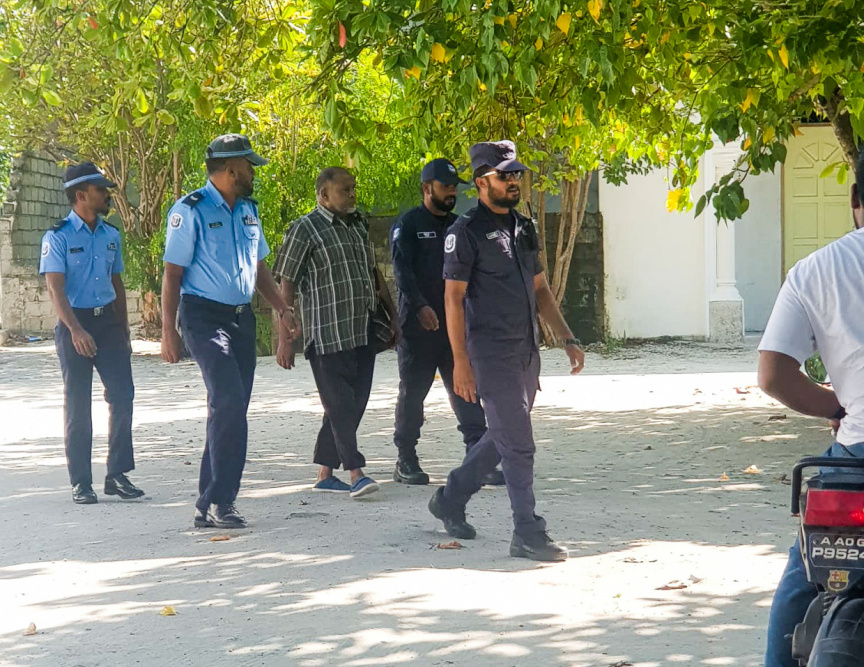 A 62-year-old man, accused of raping his granddaughter, is taken into police custody on January 17, 2020. (Photo/Reader Contribution)

The police, on Friday, arrested two of three suspects accused of raping a two-year-old child in Southern Maldives.

The suspects were arrested in the afternoon, and were identified by the police only as a 62-year-old male and an 81-year-old male.

Local residents who spoke to Sun confirm the men were the grandfather and great-grandfather of the victim.

The grandfather works as a muezzin at the island’s mosque, and had been previously accused of sexual abuse of children, said one local.

The child’s father had also been accused of involvement in the rape.

However, the police, in a statement on Friday, said that the suspects in the crime were two men, both of whom were now under arrest.

The rape had been reported to the authorities on Wednesday, January 15, after the child’s mother’s family found out about the crime when they questioned her after she complained of pain in her abdomen.

The family took her to the atoll hospital, which, after six hours of examinations, confirmed she had been brutally raped by more than one man.

“The examinations took six hours. The examinations showed the child had been brutally raped. The child sustained irreparable injuries. The doctor read the Shahada when he read the results. Said it was inhumane. She has suffered to that level,” said a family member who spoke to Sun on condition of anonymity.

The child is currently under the care of her mother’s family, with Gender Ministry social workers keeping a close watch. She is reported by the family to be deeply traumatized.

The crime had taken place last week, while the child’s mother was hospitalized after overdosing on drugs. She is currently receiving treatment at a health facility in Male’.

The child’s father is said to have fled to Male’ after the crime came to light.

Many have gathered in front of the Gender Ministry headquarters to protest against sexual crimes against children.