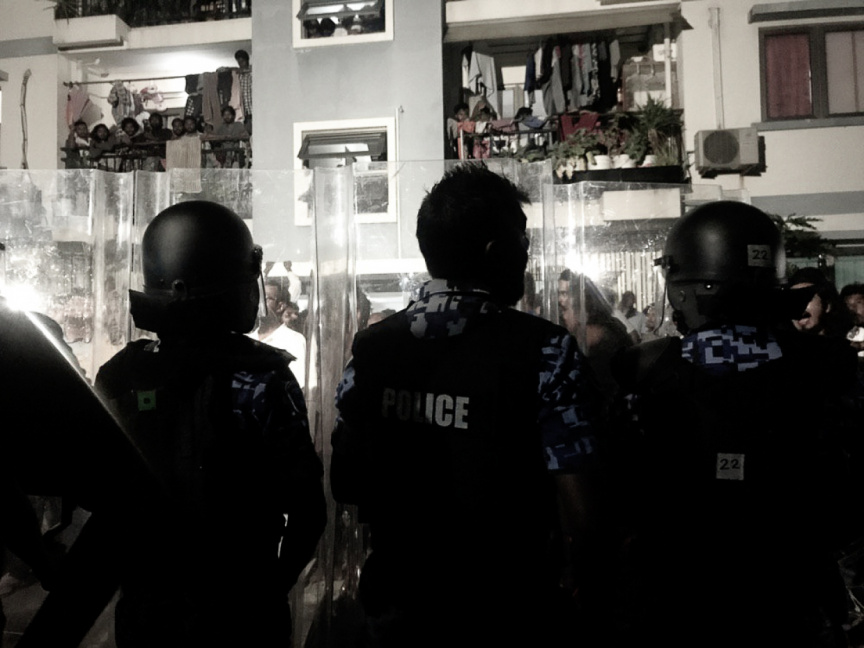 Riot police in standoff with angry protesters gathered outside the hideout of a suspect in the rape of a toddler on January 17, 2020. (Sun Photo)

The police, on Friday evening, arrested a third man in connection to the brutal rape of a toddler in Southern Maldives.

The suspect, identified by the police only as a 33-year-old male, was arrested from Flat 108 in suburban Hulhumale’. He has been transported to the Dhoonidhoo Custodial.

A family member who spoke to Sun confirmed the identity of the suspect as the victim’s father.

The rape was reported to the authorities on Wednesday, January 15, after the child complained of pain in her abdomen to members of her mother’s family.

The family took her to the atoll hospital, which, after six hours of examinations, confirmed she had been brutally raped by multiple assailants.

The father fled to Hulhumale’ as soon as the police began looking for him, allege the family.

Protesters had gathered outside the flat from afternoon onwards, after the location of his hideout was leaked to the public.

They grew increasingly restless as the time went by, and began throwing rocks and other objects at the apartment after police officers at the location, in an attempt to placate the crowd, said that they needed to secure a court warrant before they could make the arrest.

Special Operations (SO) officers were deployed to the area, and their use of pepper spray to control the crowd resulted in violent clashes which left five officers injured, and three protesters arrested.

The child is currently under the care of her mother’s family, with Gender Ministry social workers keeping a close watch. She is reported by the family to be deeply traumatized.

The crime had taken place last week, while the child’s mother was hospitalized after overdosing on drugs. She is currently receiving treatment at a health facility in Male’.

All 3 arrested in rape of toddler held in Dhoonidhoo