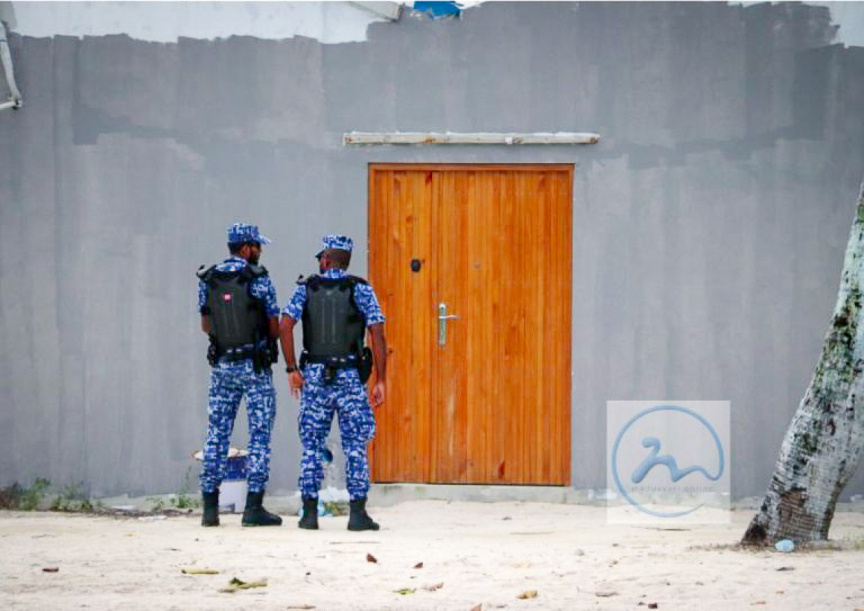 Maldives’ security forces, on Wednesday, launched a large-scale crackdown on religious extremism in R. Maduvvari. The crackdown was preceded by news of criminal activities linked with religious extremism which surfaced after a resident of the island, Ismail Hammad, 26, was stabbed and thrown overboard a boat in November.

Maduvvari residents report it has been years since religious extremism began taking root in the small island community. The existence of a group of separatist who hold radical views on religion is well known. The residents report the radical views held by this group began spreading throughout the island at an unprecedented level two or three years back.

Maduvvari had remained a peaceful and religiously harmonious island community up until the beginning of the 21st century. Residents believe religious division began manifesting after Mohamed Ameen, 35, Kariyya Villa, Maadhadu, G. Fuvahmulah was banished to the island.

Ameen is suspected of involvement in the Sultan’s Park bombing in 2007 which injured a dozen tourists. Ameen was reportedly banished to Maduvvari prior to the bombing, and is accused by the local residents of planting the seeds of religious extremism in the island.

Ameen is on the terror watchlist released by the US Department of Treasury’s Office of Foreign Asset Control (OFAC) as a senior leader of ISIS. He is accused by the US of being actively engaged in leading ISIS recruitment in Maldives. It says he previously directed terrorist fighters to Syria, but now sent them to Afghanistan.

Ameen was arrested by the local police on October 23 for suspected involvement in recruitment of locals for militant groups and sending them abroad to join militant activities abroad.

He has been charged with membership at a terrorist organization and conspiracy to carry out a terrorist activity.

He has been ordered to jail pending the outcome of his trial.

The claws of religious extremism have sunk deep into the small island community of Maduvvari. A local resident reported that the group is very well organized, and targets schoolchildren.

“They spread their ideology by exploiting schoolchildren. By brainwashing and manipulating them,” said the resident.

None of the residents have any knowledge as to the ringleaders behind the spread of religious extremism in Maduvvari. The group operates in secrecy, and the residents are forced to turn a blind eye due to fear.

The group of separatists refuse to pray at the island’s mosque, and have built their own mosque.

They refuse to send their children to school, and have been warned against believing the talk of “people who wear multi-colored shawls”. This comes straight from the mouths of some of these children.

They refuse to accept the legitimacy of local laws and regulations, and many of them sexually exploit children under the guise of “marriage”. Hammad is one such person. He is currently under arrest for sexual assault of a 13-year-old girl. Residents report another underage girl who belongs to another islands of R. Atoll had recently travelled to Maduvvari to “marry” a man from this group.

These four residences operate as camps to spread religious extremism. People from neighboring islands visit these camps, where they are “educated”, and return home.

The security forces have obtained court warrants to raid these camps. Head of Serious and Organized Crime Department, Superintendent of Police Mohamed Basheer, during a press briefing on the crackdown on Wednesday night, said that the security services have conducted raids of six residences linked with religious extremists. Electronics and doctored marriage certificates were seized as evidence.

Basheer said that the crackdown is expected to last at least a week.

“They believe the State of Maldives is a State of Kufr. And that it is permissible to harm the property, body and life of those who don’t share their radical view on religion. And they believe that taking children below the age of 18 years – outside the bounds of Sharia and law –  as brides and having sexual relations with them is permissible,” said Basheer.

He added that many of the children were found to have been denied vaccination and denied their right to education.

THREAT TO DETONATE A BOMB

The group of religious extremists in Maduvvari, angered by Eid celebrations in the island in 2018, had threatened to prepare and detonate an IED targeting the civilian population.

The issuance of this threat had led deployment of security forces to maintain security in the island.

“They believe spilling the blood of anyone who isn’t believer is permissible, and that the property of those who aren’t believers are up for grabs,” said one resident.

FAILURE IN RESPONDING TO THE THREAT

The criminal activities in Maduvvari hadn’t gained public attention until the assault on Hammad. Sun soon after reported his “marriage” and impregnation of an underage girl, and how Hammad and accomplices used their boat to rob tourist resorts.

Maduvvari residents, living in a state of fear, ask why there hadn’t been any State or government intervention until this recent violent escalation.

“We reported this to the Gender [Ministry] on numerous occasions. About these marriages and about them refusing to send their children to school. But this wasn’t given any priority,” said one resident.

Hammad’s assailant, Ismail Asif, 30, remains under arrest. He has a record of two prior arrests for assault. He had been released on both occasions on grounds of “diminished mental capacity”.

“Apparently, he possesses medical documents testifying to this. That’s why he was released. But if he has these issues and is dangerous, shouldn’t he be treated? He shouldn’t be released to society right? But there wasn’t any action and then he stabbed a third person,” added the resident.

Hammad, too, has a criminal record. He was arrested for the theft of the money safe at the Maduvvari Council, and for smuggling contraband into Maafushi Prison.

The police, in a statement announcing the commencement of the special operation in Maduvvari, said that it was a crackdown to counter religious extremism, religious separatism, denial of constitutional rights and exploitation of women and children, and spread of pro-terror propaganda and recruitment of locals for terrorist organizations.

They have promised to identify and arrest the ringleaders, assess the mental and health status of the women and children and ascertain their constitutional rights and protections.

Sun was able to verify the identity of two of the suspects; Hassan Siyad, 34, Meezaan, R. Maduvvari; and Hassan Raazee, 30, Meera, R. Maduvvari.

Papaya from Paradise: Businessman to export to Russia