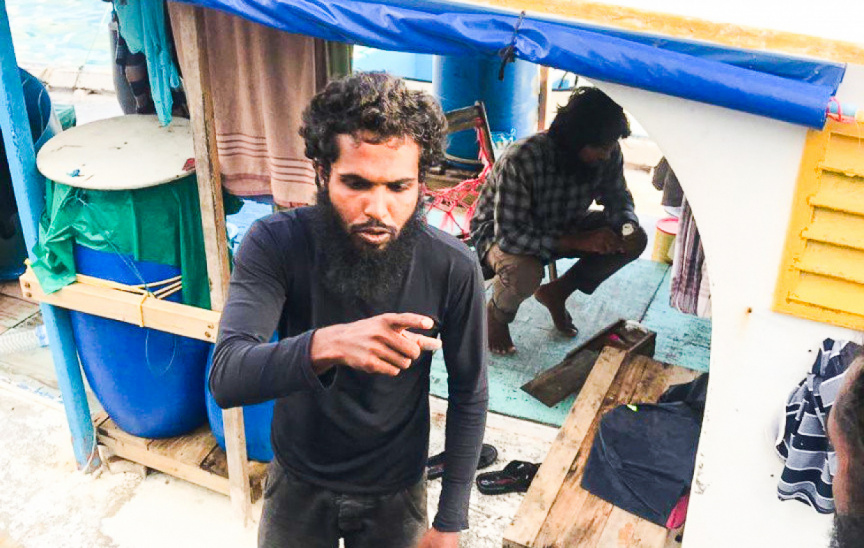 The act of stabbing and throwing overboard Ismail Hammad, 26, R. Maduvvari, from a sea cucumber fishing boat on Friday was no clear-cut crime. Many have questioned the reason for such a drastic escalation of a dispute among a group of alleged religious extremists.

The only information which Hammad divulged is that the crew had attacked him with the intent to kill after verbally condemning him to death for refusal to pledge allegiance to something. The ‘something’ which he refused to agree to remained unclear until now.

Sun has been informed the dispute took place after Hammad refused to take blame for a robbery. The sea cucumber fishing boat they use is a cover to carry out robberies in tourist resorts and residential islands. They consider the property of others as spoils of war. Rumors of this criminal operation has spread far and wide in R. Maduvvari.

The crew had attempted to steal a dinghy boat docked at the lagoon of a tourist resort three days prior to the attack. While the exact resort where the attempted robbery took place is unclear, it was the origin of the dispute. Ismail Asif, 30, who is accused of attacking Hammad, was caught in the middle of the robbery and beaten up by a mob.  This incident was even reported to the police. The rest of the crew asked Hammad to take blame for the robbery as the head of their criminal operation because it had been carried out ‘for the sake of religion’.

Sun has received photo and video footage of the incident. It shows Asif forced to lay down on the dinghy as he is surrounded by police. People watching from the resort’s jetty are heard talking.

“Look at what you are actually doing wearing your beards long. How is this right. You are full grown men,” says one bystander.

At this point, Asif shows his bruises to the police officers, and denies attempting to steal the dinghy.

“This is where they hit me. They even took my torchlight,” says Asif.

ASKED TO TAKE THE FALL FOR THE ROBBERY

The crew of the boat resumed its travels on the night of Thursday, November 21. Sun has been informed that the rest of the crew, after the boat was well into its journey, pressed Hammad with a proposition. They suggested that Hammad take the fall for the attempted robbery and save the rest of the crew, as the case had been reported to the police.

The rest of the crew, after Hammad refused to take part in this scheme, pressed him further.

“This is for the sake of religion and you must do this,” they allegedly say.

Following Hammad’s continued refusal, they attempted to cut his throat and throw his body overboard. He sustained extensive injuries to the back of his head, his neck, his face, and has defensive wounds on his hands.

Hammad, after he was thrown overboard, swam to nearby A. A. Maalhos in his wounded state.

Maalhos residents report that two of the crew came looking for Hammad after he was taken to the island’s health center.

Hammad has a record of prior arrests on robbery charges, including the theft of a money safe from Lh. Naifaru.

The reason for his refusal to take the fall for the latest robbery is unclear.

ROBBERY UNDER COVER OF FISHING OPERATION

Religious extremists believe they have the right to claim ownership of property of non-believers. They don’t consider it robbery. This belief is highlighted in investigative reports released by the Disappearances and Deaths Commission (DDCom) which uncovered evidence of several large-scale robberies in the capital, Male’ City, to have been carried out to fund operations by terrorist groups.

Maduvvari residents say the boat on which the stabbing took place is used to carry out such robberies. A source from Maduvvari told Sun that the crew mostly targeted tourist resorts, and carried out their robberies at night. The police, in September, arrested several suspects after air conditioning systems stolen from a resort were found installed at a private residence in Maduvvari. The suspects who were arrested are said to be allied with the crew of the boat.

“The residents of that home were unaware the ACs were stolen property. They bought it because it was being sold at a cheap price,” said a Maduvvari resident.

While the investigative agencies find more and more links between religious extremism and crimes such as murders, assaults and robberies, the police have arrested only Asif – who has confessed to the crime.

Home Minister Sheikh Imran Abdulla, who was summoned to the Parliament for a ministerial questioning session last Tuesday, said that the police investigation pointed to the stabbing being carried out by a single assailant. He said that that investigative findings showed “most of the people on the boat were asleep”.

He also said that the boat hadn’t been taken into police custody because there wasn’t any reason to take it into custody.

However, the new information confirms the boat is used as a cover to carry out robberies by a group of religious extremists, and that the money they collect is used to fund jihadist activities. This crime serves to show the level of organization within extremist cells, and the level of threat it poses to local communities.