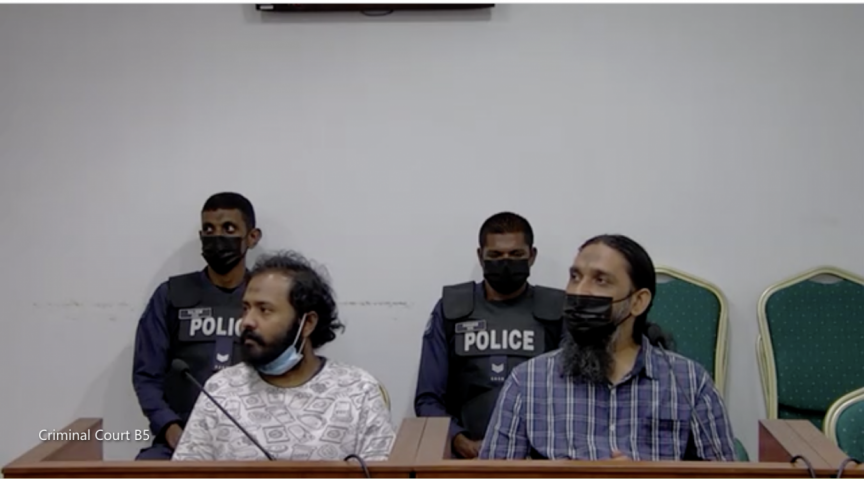 Abdulla Ali Manik, Bahaaruge (R), HA. Molhadho, who is suspected of supporting a terrorist organization, captured at a hearing held at the Criminal Court on January 9, 2022.

Abdulla Ali Manik, Bahaaruge, HA. Molhadhoo – whom the Police suspects to be an individual propagating extremist ideologies in the Maldives – has claimed that the terror organization, Islamic State (IS) disbanded two years ago and that he does not support the organization.

Ali Manik was arrested under the suspicion of propagating extremist ideologies during a special operation conducted by the Police following the terrorist attack made against Parliament Speaker, former President Mohamed Nasheed on May 6, 2021.

He is charged with supporting a terrorist organization under Article 16-1 (b) of the Counter-Terrorism Act with reference to Article 16-1 (a) (1). In addition to Ali Manik, Mohamed Thasleem, Alanaasige, HA. Hoarafushi, is also charged with the same offense.

When the prosecution read out the charge against both the individuals at a hearing held today – they both pled not guilty.

In pleading not guilty to the charge, Ali Manik said that he had been informed that the leader of IS was assassinated at the end of 2019, subsequent to which the organization has been disbanded.

“However can I support an organization that has ceased to exist? Have not made any claims to suggest I support that organization,” he had said.

Speaking further, Ali Manik alleged that the Police promised leniency in custody for some of the other individuals arrested in connection to the case during the investigative stage should they make statements against him.

“I describe the secret evidences as false evidences that has been fabricated,” he had said.

In responding to the allegations by the prosecution that he does not partake in congregational prayers in Maldivian mosques – Ali Manik said that he worked for the government as an Imam at a mosque in 2017.

In reference to this fact, he said that his neighbors would have witnessed him attending congregational prayers at the mosque – adding the evidences submitted by the prosecution are ‘pure lies’.

Ali Manik was arrested from Male’ City on May 18. Police believed him to be a top recruiter of Maldivians for militant activities overseas in the name of ‘jihad’, and suspect him of holding separate communal prayers and holding classes to propagate extremist ideologies.

Ali Manik was involved with a group of separatists who propagated extremist religious ideologies in HA. Himandhoo, and faced off with the security forces armed with wooden bats, sharpened metal rods and machetes in 2007.