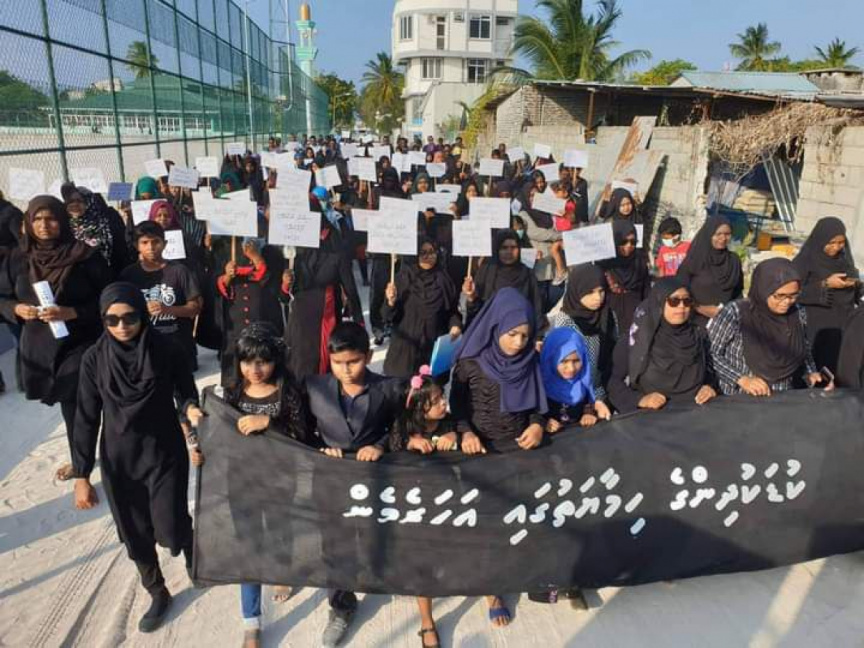 Locals protest following the gangrape of a 14-year-old girl in R. Maduvvari.

Top government officials have been accused of involvement in covering up the gangrape of a 14-year-old student in R. Maduvvari in March last year.

Private TV station, Channel 13 aired audio clips on Friday’s episode of ‘Hajam’ show, which it claimed was recordings of phone conversations one of the suspects, a teacher, had with two men, identified only as ‘Adam’ and ‘Samarey’.

In the alleged phone conversation with ‘Adam’, the teacher claimed he discussed the case with President Ibrahim Mohamed Solih through Moosa Ali Manik (Mookey), the Managing Director of Road Development Corporation (RDC). He discussed the statement the victim gave to Gender Ministry and what she told her family.

‘Adam’ responded that Mookey called President’s Office Chief of Staff Ali Zahir and the President himself, and “looked into it”.

In the alleged phone conversation with ‘Samarey’, the teacher claimed that Mookey received “that information” through the President.

‘Samarey’ responded that Mookey called Economic Minister Fayyaz Ismail in his presence, and that Fayyaz said he had called Home Minister Imran Abdulla.

The teacher responded that “if she doesn’t that, it didn’t happen”.

The teacher is accused of taking the victim, then-14 years old, to a guesthouse in Maduvvari, where there were three more men waiting, threatened her with a knife, forcing her to consume a drink believed to have been laced with a drug, and gangraping her.

The teacher denied the allegation, and insisted he was framed.

“It is important that the public know top government officials are influencing such a case. We brought this to light after extensive studies into the case,” he said.

“We believe it is our responsibility to seek justice when the justice such children are entitled to is being obstructed using influence.”

The victim’s father, Ibrahim Riza said the recordings confirmed the family’s suspicious of government involvement in coverup of the crime.

He said there was sufficient grounds to believe the case was filed due to influence from top government officials.

“My question is, why would the MD of a road development corporation need to call the Economic Minister and discuss a sexual assault case under investigation by the police. Is that part of their mandate?” he asked.

“President Ibrahim Mohamed Solih, I plead to you, please facilitate a way for a free and fair investigation and for legal action in the sexual assault of my daughter.”

The crime had sparked a series of protests in Maduvvari, which turned violent.