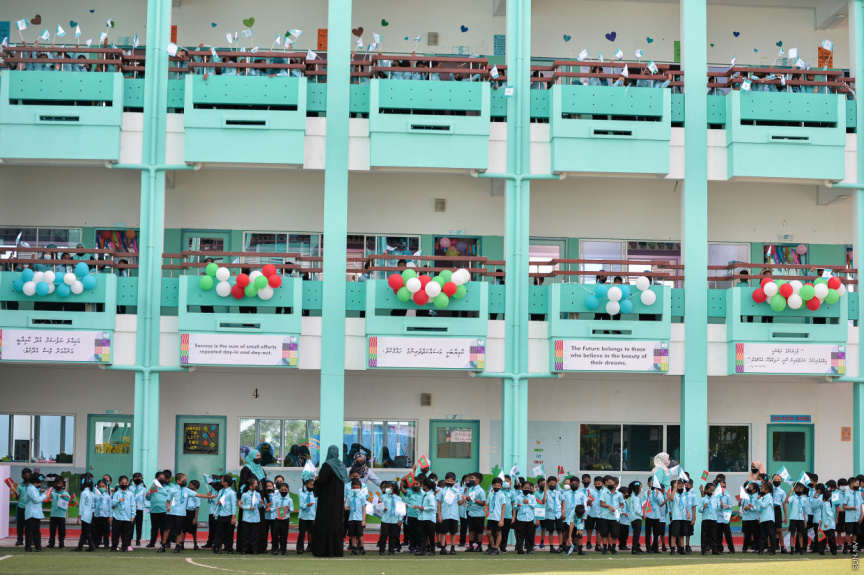 Students gather for an assembly at Rehendhi School on August 10, 2021, to mark the beginning of the academic new year. (Sun Photo/Fayaz Moosa)

Education Minister Dr. Aishath Ali told the Parliament on Monday that the government was working on building four additional schools in suburban Hulhumale’.

Aishath, who was summoned to the Parliament on Monday morning, was questioned by Central Henveiru MP Ali Azim when schools in the greater Male’ area would complete the switch to one session.

Aishath responded that the greatest challenge to making the switch remained the shortage of space in schools.

She said the Education Ministry was working on solving the issue.

Aishath said that construction work on the schools would begin this year.

“We are working on constructing CHSE’s new building in Hulhumale’. Once it is relocated to Hulhumale’, it will provide us the opportunity to switch schools in Male’ to one-session schools. We are operating under such plans," she said.

Aishath said that the plans will be implemented once the Education Ministry is allocated a budget for the projects.

She said she was unable to say when the plans would be implemented.

Converting schools in Maldives to one-session schools is one of the policies of the main governing party, Maldivian Democratic Party (MDP).