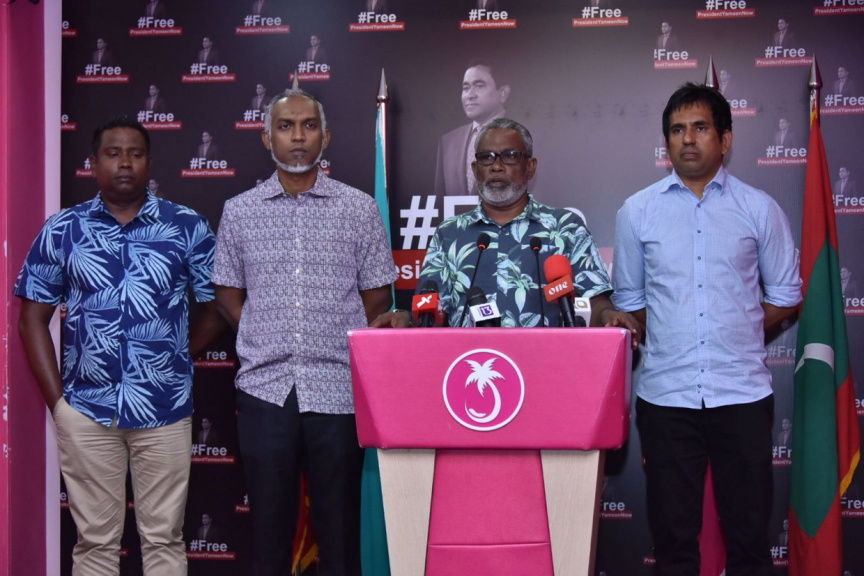 Senior leaders of the opposition political PPM-PNC coalition speaking at a news conference.

Opposition coalition has speculated that the former President Abdulla Yameen is not being released on bail due to the upcoming local council elections in April.

At a news conference held yesterday, Peoples National Congress President Abdul Raheem Abdulla responded to a question by the “Sun” and accused that the government was working from the inside to ensure that the former President remains in prison for the local council elections.

“That is a certainty. The government wanted to keep the former President in prison for the two elections that came after it took office,” said Abdul Raheem.

Former President Yameen was sentenced to five years in prison after being found guilty of money laundering on November 28, 2019.

The case was appealed to the High Court on November 30 and the High Court stated that it had accepted the case on December 18, 2019. A request to release President Yameen on bail was also submitted by his defense attorneys.

“President Yameen was arrested for the parliamentary elections. His appeal case has not been scheduled and his bail has also not been set because of the upcoming local council elections,” said Abdul Raheem.

It is within the discretion of the High Court to decide on such matters of bail if a reasonable offer is presented to the court by the defendant in a case of appeal.

Abdul Raheem also stated that PPM-PNC candidates must be elected for the country to remain as Maldives and people should vote for opposition candidates for the sake of the former President as well.

The former President lost a lot of momentum in the Parliamentary election due to the detention and campaigned with recorded video messages and phone calls.