Opposition: Will not accept an election which Yameen cannot compete 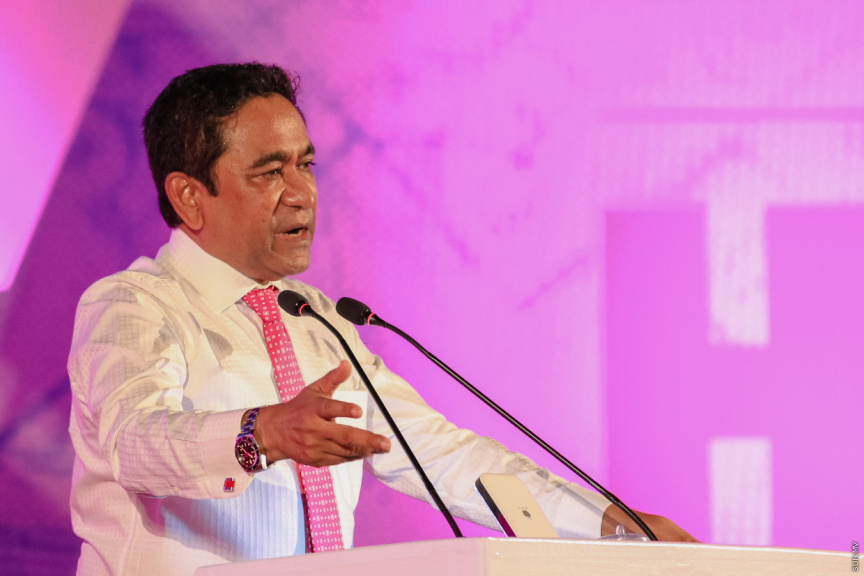 Opposition PPM-PNC coalition, on Tuesday, stated that they will not accept a presidential election in which their leader, former President Abdulla Yameen Abdul Gayyoom cannot compete.

Yameen is presently serving an 11-year prison sentence after being found guilty of money laundering and bribery in connection to the sale of V. Aarah for resort.

Speaking during a press conference held by the opposition coalition on Tuesday – PPM’s Spokesperson Heena Waleed said that Yameen’s name will be written on the ballot papers.

She added that Yameen cannot be silenced, nor his work would cease even if he is imprisoned. Heena reiterated that Yameen remains as PPM’s presidential candidate – emphasizing it would not change.

“As this coalition believes, Yameen can compete in the presidential election. His name will be on the ballot papers. Henceforth, this coalition will not accept the election this administration is trying to hold in which Yameen cannot compete as an independent and a fair election,” she said.

Heena called on the immediate release of Yameen – citing that the fairness of a presidential election is established when there is an independent opposition leader.

“Calling on the immediate release of President Yameen, and urging the government to act in a manner that opens doors for him to campaign for the election,” she said.

Yameen, who is presently in prison, has only one way he could compete in the presidential election which is by proving himself innocent at an appellate court. However, as appeal process is expected to consume months, perhaps even years, it is more likely for Yameen to be unable to compete in this year’s election.

'Will build an airport at Dhidhdhoo if elected'