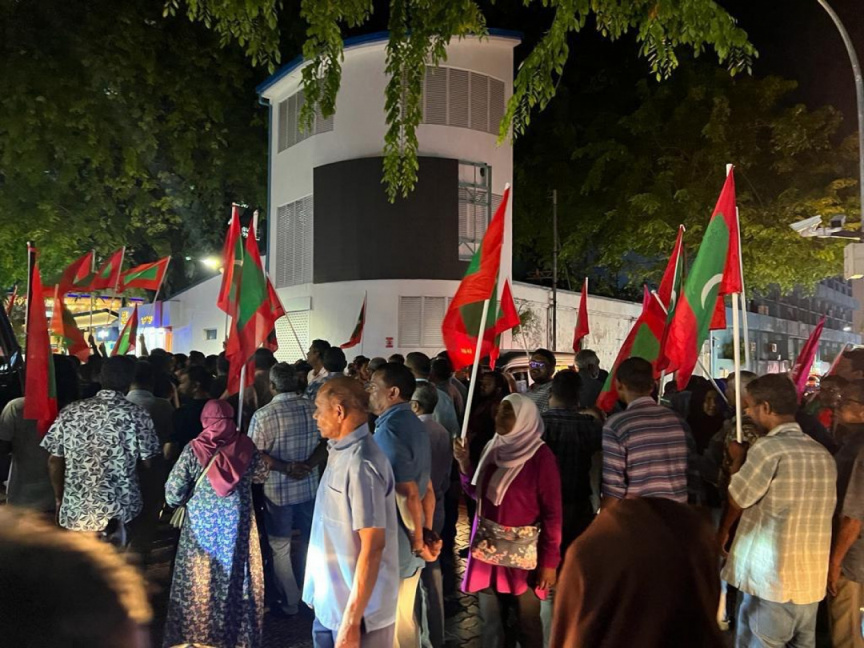 The Progressive Congress Coalition accuses Maldives Police Services to have used unnecessary force against the demonstrators, and hence condemned this.

In a press statement released by the opposition on Monday, it was noted that Police have been using unnecessary force against the peaceful demonstrators protesting against the “illegitimate” sentence delivered against former President Abdulla Yameen Abdul Gayoom.

“The people are gathered on the street within the rights granted to them under the Constitution of Maldives for freedom of expression and to protest.

It was also stated that Police vehicles were driven at high speed towards those gathered silently protesting, without any care.

The opposition says these acts are inhuman and accused authorities of failing to take any action against such Police officers. They added that it was unacceptable for the Human Rights Commission of the Maldives (HRCM) as well as the National Integrity Commission (NIC) to keep mum on the issue.

In addition to this, the statement called to release the two protestors who remain arrested, with a 15-day remand issued against them.

The coalition comprising of Progressive Party of Maldives (PPM) and People’s National Congress (PNC), have been rallying, calling for the release of the opposition leader, Yameen, who was imprisoned for money laundering and bribery.

Yameen was sentenced to 11 years in prison on Sunday after he was found guilty of money laundering and bribery in connection to the sale of V. Aarah for resort development during his administration.

The sentence against him had come a year after he was acquitted after getting convicted of similar charges in 2019.