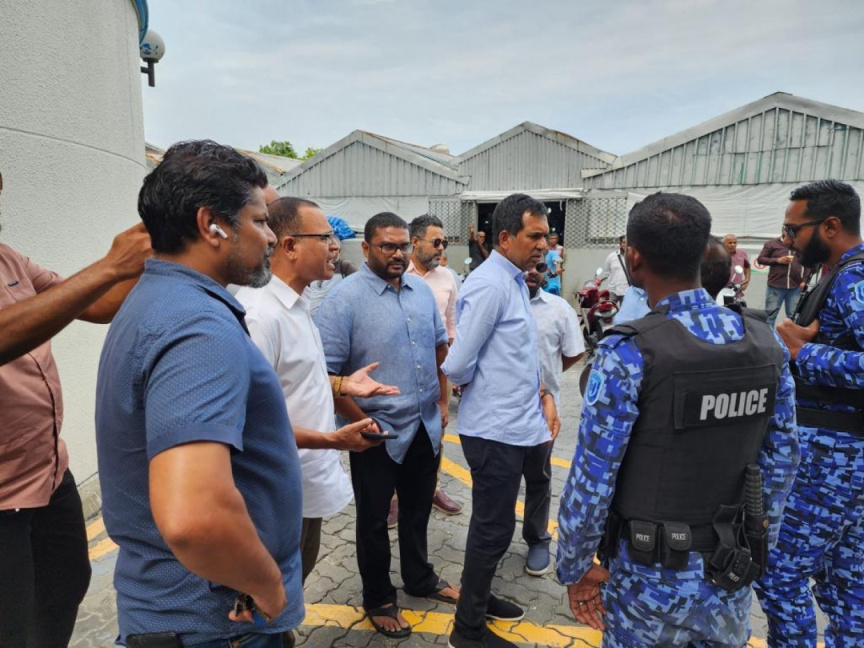 Members of the opposition coalition's leadership at Criminal Court on December 26, 2022. (Photo/PPM)

Members of the opposition coalition’s leadership, on Monday morning, gathered near Criminal Court over delays in the handover of the case in opposition leader, former President Abdulla Yameen Abdul Gayyoom’s Aarah trial which concluded yesterday.

A practice director issued by the Supreme Court of the Maldives states that the case report of a case must be handed over to all parties involved on the same day the verdict is delivered.

Heena Waleed, the Spokesperson of Progressive Party of Maldives (PPM), said that members of the opposition coalition’s leadership alongside Yameen’s legal team gathered at Criminal Court area at 10:00am this morning.

Heena said that the leadership members visited the court to provide support for the legal team.

She also noted concerns by the leadership as Yameen’s hearing on Sunday, which was uploaded to Criminal Court’s youtube channel, has now been deleted.

Dr. Jameel told Sun that the appeal process can only be initiated upon receiving the report.

He added the need to appeal early in the case as Yameen is a prospective candidate working towards competing in next year’s presidential elections.

Yameen was charged with money laundering and bribery in connection to the sale of V. Aarah for resort development during his administration.

He was accused of abusing his position and taking a USD 1 million bribe to facilitate the sale of Aarah to Yoosuf Naeem, a former parliamentary representative for Felidhoo constituency, and laundering the said money.

He was sentenced to seven years in prison for the money laundering charge, alongside a fine of USD 5 million. As per the judgment, Yameen needs to settle the fine with Maldives Inland Revenue Authority (MIRA) within a period of six months.

Meanwhile, he was sentenced to four years in prison for taking a bribe.