Opposition coalition: Mistakes on the school textbooks are deliberate 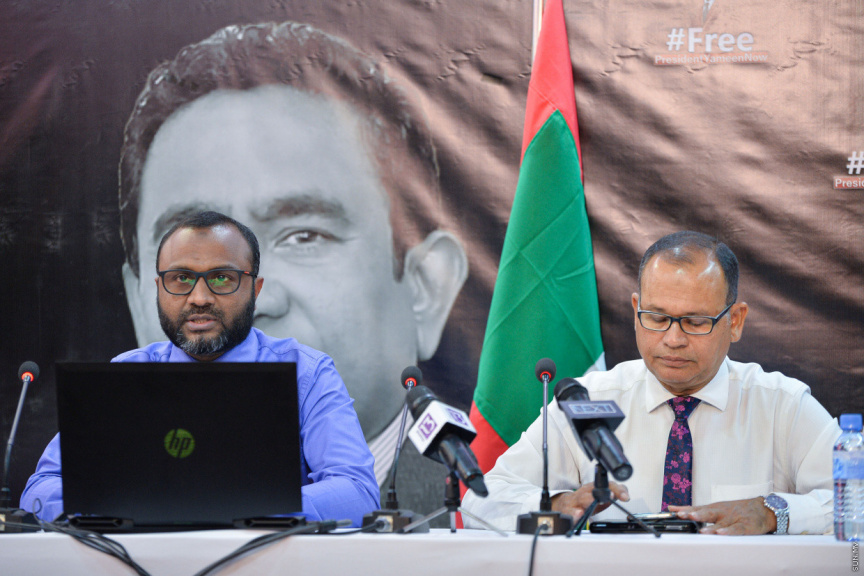 A capture from a press conference held by the opposition coalition on September 5, 2021. (Sun Photo/Fayaz Moosa)

The opposition coalition had alleged that the mistakes recently found on school textbooks have been made deliberately – under a plan.

“The government needs to prove that this was not done on purpose. It is hard for us to believe that this is a mere human error. It is not just one mistake – it is many,” he further added.

Speaking further, Adam Shareef noted that the previous administration had revised the school curriculum – based on 10 years of research. He also added that the changes brought to the education system presently – hinders efforts to encourage nationalism amongst students.

“We do not know the government’s intention behind this. It is possible that this was done to just test the people – to see how they would react upon seeing such mistakes,” he had said.

Adam Shareef also stressed that it has been proven today that the current education system has failed.

“Because of the issues we are facing today – I can say that the system has failed. Seeing more mistakes than when we had when we revised the curriculum and began from scratch means that the system had failed. Therefore, the government needs to conduct an audit of the system,” he stated.

Former Islamic Minister, religious scholar Dr. Mohamed Shaheem Ali Saeed also was present at the press conference – and had spoken on the matter as well.

In this regard, Dr. Shaheem alleged that textbooks were being revised because it encouraged religious extremism and hate crimes. Dr. Shaheem noted that the books had not encouraged such things at all.

“Recently, there have been talks to revise the Islam textbooks citing that some of the contents of its encouraged hate crimes. I can say so with guarantee that the Islam curriculum does not embody any content that may pave way for religious extremism,” he had said.

The press conference held today by the opposition coalition was to express their concerns over the mistakes in Quran verses written in Islam and Quran textbooks that had come to light yesterday.

'To finish retrieving surplus of the salary this week'