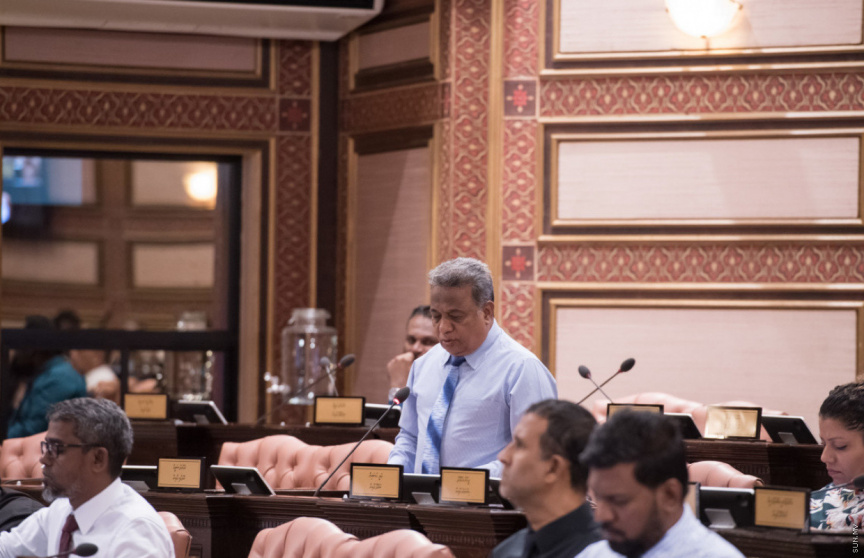 Photo shows MP Ahmed Saleem standing in the the 41st session of the 19 parliament of Maldives. (Photo/Parliament)

Parliament’s minority leader Ahmed Saleem has said that the three powers of the state are tangled and the country is headed in a backward direction of a gloomy world.

MP Saleem began his speech by calling to free the former president Abdulla Yameen who is in jail after being convicted of money laundering in December 2019.

MP Saleem said that Yameen’s imprisonment hindered the opposition activities and its ability to hold the government responsible. He also said that the main element of a multi-party system was for several competitive parties to actively take part in the “political stadium”.

Irretrievable damage may come from merging the three powers!

MP Saleem attributed this to the slack nature of how the government is run and its failure to carry out its legal duties, before warning that this may cause unrecoverable damage to the country.

“This may lead to irretrievable damage inflicted on the country. Article 106 of the constitution mandates the president to arrange and ensure that the three powers of the state are operating independently within the constraints of the constitution,” said MP Saleem.

The composition of the JSC needs to be changed!

MP Saleem reiterated that the judiciary needed to remain free of influence if it was to gain the trust of the public.

“The citizens would only begin to trust the judiciary if it is given the chance to honestly improve. When the day the government stops influencing the judiciary, on the day that the JSC is rescued from the claws of politics,” said MP Saleem.

He said that as long as political figures remained in the JSC, it could not be separated from the political influence before calling for amendments to the law to shuffle the composition of the JSC.

The Maldives lacked a balanced foreign policy, according to MP Saleem.

He said that a policy was the power and discretion a country has to decide things. He noted that this power for the Maldives has begun to fade away.

Calls to increase benefits to those with special needs!

MP Saleem also criticized the government by saying that it had failed to establish a safe environment for children in the country, which was a responsibility levied upon the government to protect the future of the country.

“It is proof that the government is neglecting the rights of children and their feelings when it doesn’t take charge and say something at a time when sad events of child abuse are occurring in the country,” said MP Saleem.

He advised the judiciary to work responsibly to protect and ensure the rights of the children.

“I call on the government to increase the allowances and amenities for people with physical and psychological disabilities,” said MP Saleem.

MP Saleem also said that the number of corruption cases were increasing day by day, which was a concern for the citizens. He also noted the fall Maldives saw in the corruption index of 2019.

“(It shows) That the government’s zero-tolerance policy has failed when corruption increases in the country day by day. It is a worrisome issue for the citizens when accusations of corruption are directed at the highest level of the government,” said MP Saleem.

“The true decentralization system, when the citizens are empowered”

The Maldives was introduced to the decentralization system years ago, and MP Saleem mentioned this point when he said that some leaders did not have the confidence to leave powers to the citizens.

He was jeered by the MPs of the governing MDP in the parliament at this point. MDP has always maintained that the decentralization system is something that belongs to the party.

MP Saleem then went on to say that he did not expect the government to earn the expected revenue from aids and income. He also said that the economy was shrinking as the government was failing to deliver on its promises.

The government was also not doing enough to combat terrorism according to the minority leader who then pointed out the government's failure to deliver on the promises of cheaper internet prices and housing policies.

“I see the country moving in the direction of a gloomy, undeveloped and backward world. Traveling in this direction would not bring Maldivians to the destination they want. We guarantee that we will remain to work for the rights of the people and change the situation of the country.” said MP Saleem, concluding his speech.