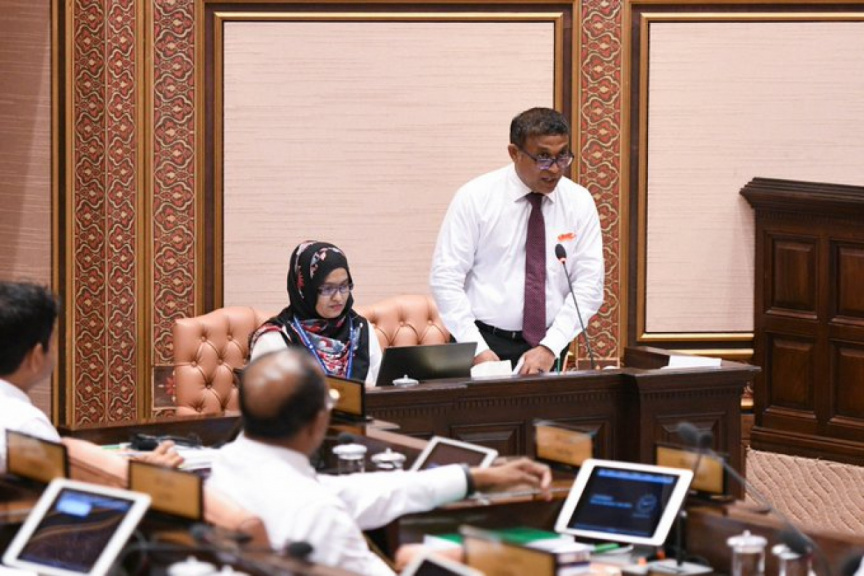 Planning Minister Mohamed Aslam answering questions by MPs in the Parliamentary session held on November 25, 2019. The Minister had assured MPs at the session that airports in the country will not be handed over to foreign companies for management and operations after answering a question regarding the Maafaru airport in Noonu Atoll.. (Photo/Parliament)

Planning Minister Mohamed Aslam has assured MPs that no airport in the Maldives will be handed over to a foreign company to be managed or operated as a foreign direct investment.

The Minister was speaking at the Parliament today and responded to a question by Manadhoo MP Ahmed Haaroon who questioned why Maafaru airport in Noonu Atoll was not given for management by the company that developed it.

The Minister answered by pointing to previous experiences which he stated were clear indications that it was not in line with the objectives of the people. The Minister highlighted the GMR conundrum with the-then Male’ International Airport and stated that there existed people “who got terrified if a foreign company gets too close to a local airport” in the country. This conclusion had led the Minister to decide against giving the airport for management to a foreign company.

“We decided that the government did not want to give airports to a foreign company to be operated and managed by. So, we are implementing that policy. The policy will change when the situation in the country changes. The current situation dictates that this is the policy that must be undertaken.” said the Minister.

The airport in Maafaru was invested USD 60 Million by the Abu Dhabi Fund of the UAE, however, it was was handed over to local company Island Aviation for operations. The airport is an international one and is set to be operational by next month.