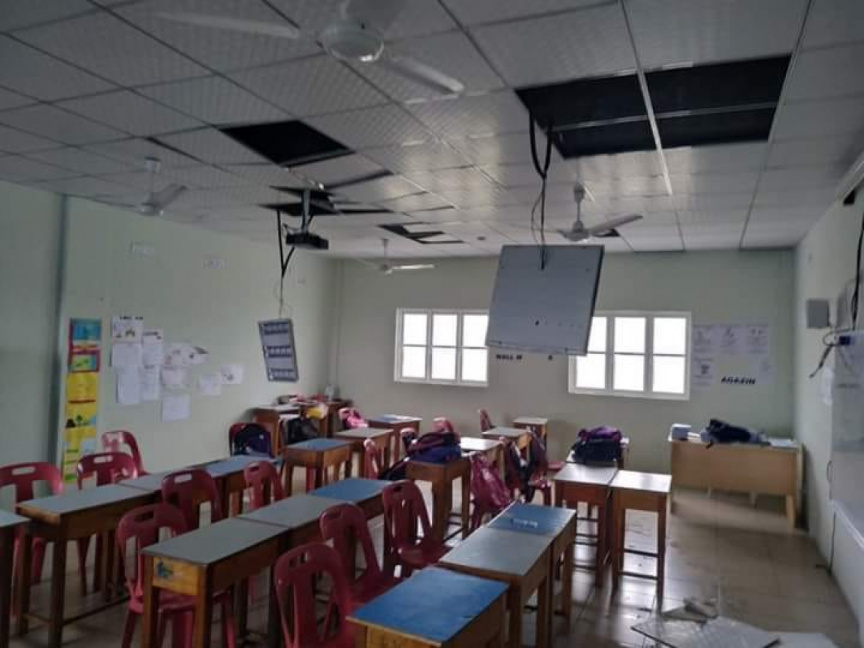 The ceiling of a classroom at Sh. Milandhoo School lays collapsed on July 18, 2019. (Photo/Facebook)

The ceiling of three classrooms at the school in Sh. Milandhoo collapsed this Thursday morning.

He said that students had to be evacuated from the classrooms following the ceiling collapse and subsequent electrical short circuit.

“The ceiling is assemblable. The ceiling collapsed due to strong winds. Apparently it was noted when the school was built that that type of ceiling isn’t suitable,” said Shiyam.

He said the school also faced flooding inside the three classrooms, the library, laboratory and the computer lab.

“No student sustained any injury. But there’s a lot of flood damage,” said Shiyam.

Shiyam said it had been raining heavily over the island since early Thursday morning.

Maldives Meteorological Service has issued yellow alert over Northern and Central Maldives with the warning of torrential rain and strong winds over the area.

The Milandhoo smart school was opened in 2018. It has 30 classrooms, two additional classrooms for special needs students, three science labs, a library and a computer lab.

The school was built at the cost of MVR 57 million from the State budget.