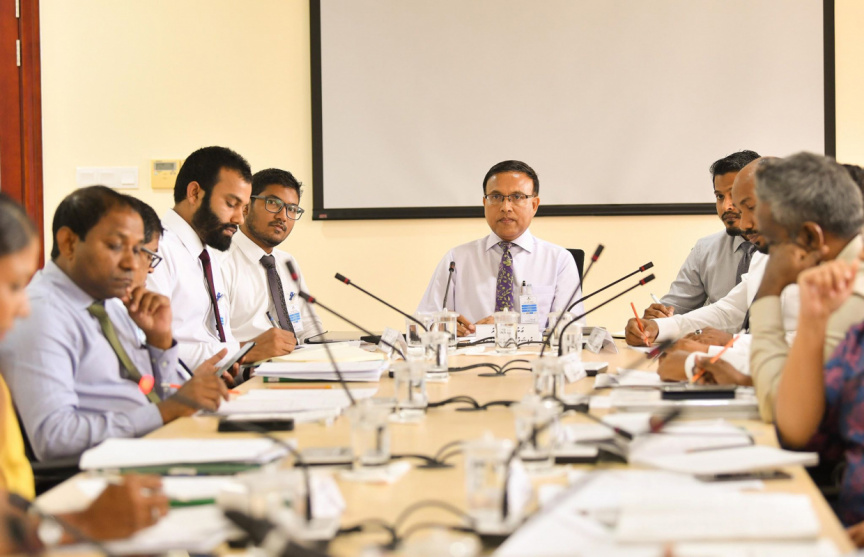 Department of Judicial Administration (DJA) is summoned for questioning by the Judicial Committee of the Parliament on July 9, 2019. (Photo/Sun/Fayaz Moosa)

The 56 lawyers who filed a petition with the Supreme Court in 2017 weren’t suspended at instructions from the court, says Department of Judicial Administration (DJA).

The members of DJA was summoned to the Judicial Committee of the Parliament last Tuesday.

At the committee meeting, Fonadhoo MP Moosa Siraj referred to a comment by Chancellor of Judicial Academy, Ahmed Majid at a press conference.

At the press conference in question, Majid admitted the DJA has been wrongful in suspending the 56 lawyers.

Moosa Siraj asked the DJA whether any action was taken against the officials who made the decision to suspend the lawyers.

In response, Majid said the decision to suspend the lawyers wasn’t made at the instructions of the Supreme Court.

Judicial Administrator Dr. Abdulla Nazeer said there did not exist any paperwork to determine how the decision was made.

He said the decision was made under the charge of former Judicial Administrator – Hassan Saeed.

Following the response, Moosa Siraj said he asked the question because, as far as he knew, DJA made all its decisions based on instructions of the Supreme Court.

Dr. Nazeer replied that he couldn’t say for certain the decision was not at the specific instructions of the Supreme Court.

Nazeer replied that he did not believe any of the current staff at DJA had any involvement in the 2017 decision.

Jabir loses his temper over refusal to build casinos