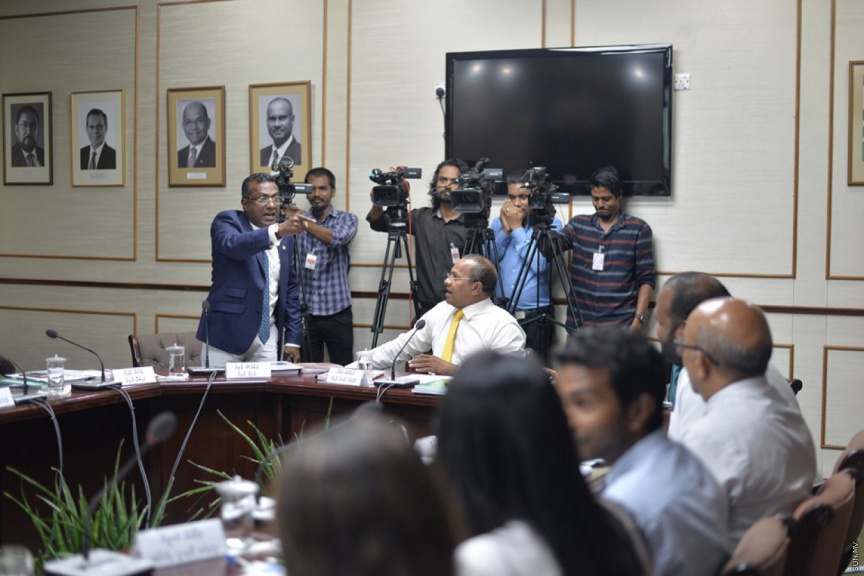 Kaashidhoo MP Abdulla Jabir (L) gestures at Tourism Minister Ali Waheed during the meeting of the Government Oversight Committee of the Parliament on July 10, 2019. (Photo/Sun/Fayaz Moosa)

Tourism Minister Ali Waheed says the Maldivian administration does not plan on allowing casinos to be run in Maldives.

Senior Tourism Ministry officials were summoned for questioning by the Government Oversight Committee of the Parliament this Wednesday.

At the questioning session, local businessman and Kaashidhoo MP Abdulla Jabir queried the Tourism Minister as to why casinos are not allowed in Maldives.

In response, Minister Ali Waheed said the Maldivian Constitution establishes Maldives as a 100 percent Islamic nation, and the administration will therefore not allow any casinos to be built in the country.

“We don’t plan on building casinos. We will run the tourism industry of Maldives with respect to all principles of the religion of Islam. So my answer to that question right now is no,” said Ali Waheed.

Jabir then asked why the sale of liquor and pork was allowed within the tourism industry when both were prohibited in the religion of Islam.

Ali Waheed replied that it the sale of liquor and pork was allowed because it is permissible within the rule of law.

“It’s because there’s room for it according to the current law on promotion of tourism passed by the Parliament,” said Ali Waheed.

Jabir lost his temper, stood up from his seat and exchanged heated words with Ali Waheed at his answer.

He also announced his resignation before exiting from the committee meeting hall.

Liquor, pork and pork based products are imported and sold in Maldives with a special permit issued under a regulation established under Import Prohibition Act.

The permit is issued to tourist resorts, safaris and duty-free shops.

Ali Waheed answered all questions by committee members head-on during the session.

Man arrested for threatening son with a knife