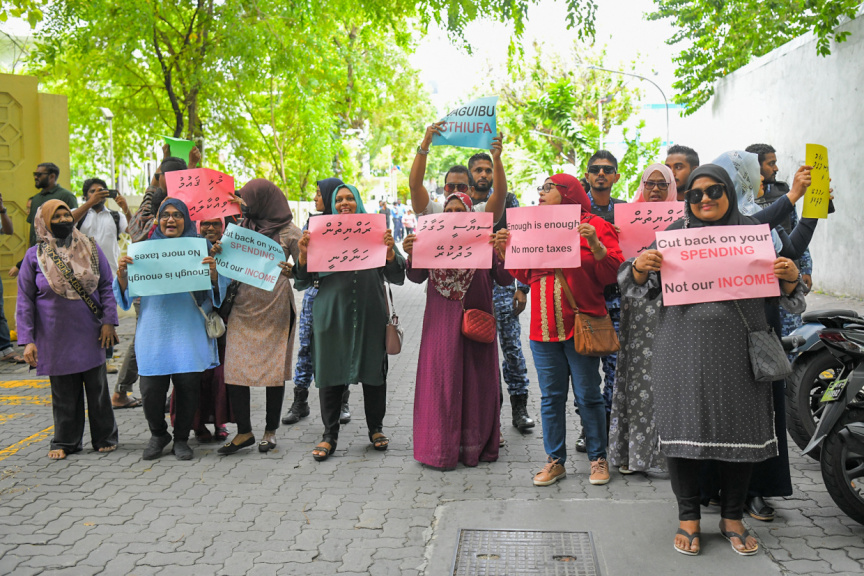 The opposition staged protests against the tax bill near the Parliament area. (Sun photo / Mohamed Hayyaan)

While members of the public from the opposition gathered near the Parliament in the afternoon, Maldives Police Service moved them from the area.

The opposition voiced against the government’s attempts to increase tax at a time when fuel and food prices are on the raise in the global market. They note that this would have grave impacts on the lives of the citizens.

Furthermore, the opposition says that this bill submitted by Ihavandhoo MP Mohamed Shifau on behalf of the government was designed solely for the profit of Parliamentarians of the ruling Maldivian Democratic Party (MDP).

Meanwhile, despite being on the agenda, the Parliament concluded the session on Monday without calling to vote on the tax hike bill.

When the session reconvened after recess, Vilufushi MP Hassan Afeef was presiding, who noted that the quorum was not met to call for a vote on the bill. He then stated that hence, the session was concluded.

Subsequently, the members supportive of the government vocalized their disapproval. Despite this, MP Afeef went ahead in concluding the session.

Bills such as the tax ones require at least one-third of the members to be present to call for a vote.

After exiting the Parliament, MP Adam Shareef spoke to the press gathered near the protestors. He stated that the government has numerous wasteful expenses, without any proper system in place to manage it.

The government is pushing to raise the GST from 6 percent to 8 percent, and the TGST from 12 percent to 16 percent.

Supporters of the government, opposition and the general community have raised concerns over efforts to implement the tax hike. They claim the need to cut down political posts within the government and reduce pointless expenditures In order to combat the economic crisis.