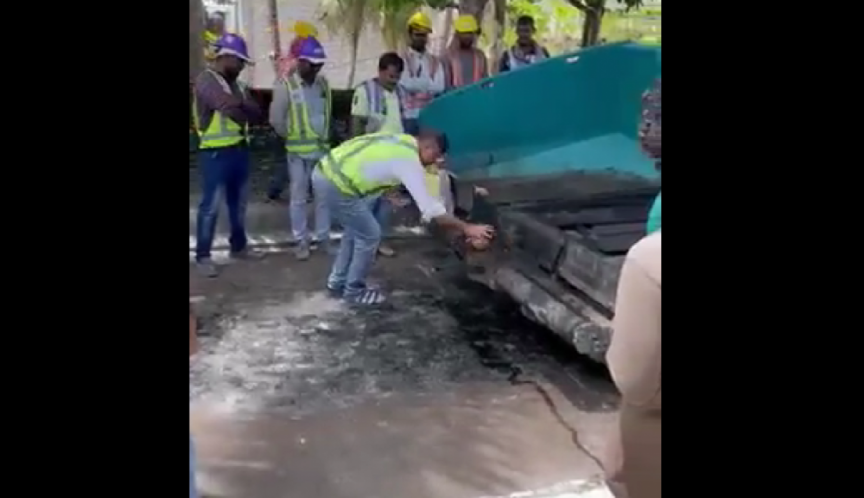 Denouncing the commencement of work on the development of Addu City’s Hithadhoo district’s road with an act of worship of the Hindu religion by India’s Afcons Infrastructure Limited contracted for the project – Addu City Mayor Ali Nizar, on Wednesday, has stated that the people who carried out the worship have been counseled.

Work on the development of Hithadhoo roads was commenced by Afcons on Tuesday by breaking a coconut, which is an act of Hindu worship.

A video that went viral on social media shows workers praying near a machinery used for the road works, which is followed by them breaking a coconut on the machinery.

Residents from Addu City who spoke to Sun regarding the matter had expressed their concerns.

“No party should be given the opportunity to commit acts that violate our practices and culture on our land. These are extremely scary things, if let be. Action ought to be taken against these workers from Afcons,” one of the residents had said.

Speaking to Sun, Addu Mayor Nizar said that none of the council members were aware of a ceremony to commence physical works on the project.

He said that the work having commenced with an act of Hindu worship had come to the Council’s attention through social media.

“It is not an event which took place with our knowledge, in any official capacity. Council had not really been informed of the commencement of the work. We also saw that scene through social media. It is not right to commit such an act so openly in light of the Maldivian laws,” he had said.

Nizar said that workers have been briefed regarding Maldivian practices and culture previously even. He added that with yesterday’s incident – they have been counseled to not repeat such an act.

Afcons was contracted for the design and build roads and drainage systems in Addu City for MVR 1.1 billion. The project is financed under the USD 800 million line of credit from the Exim Bank of India.