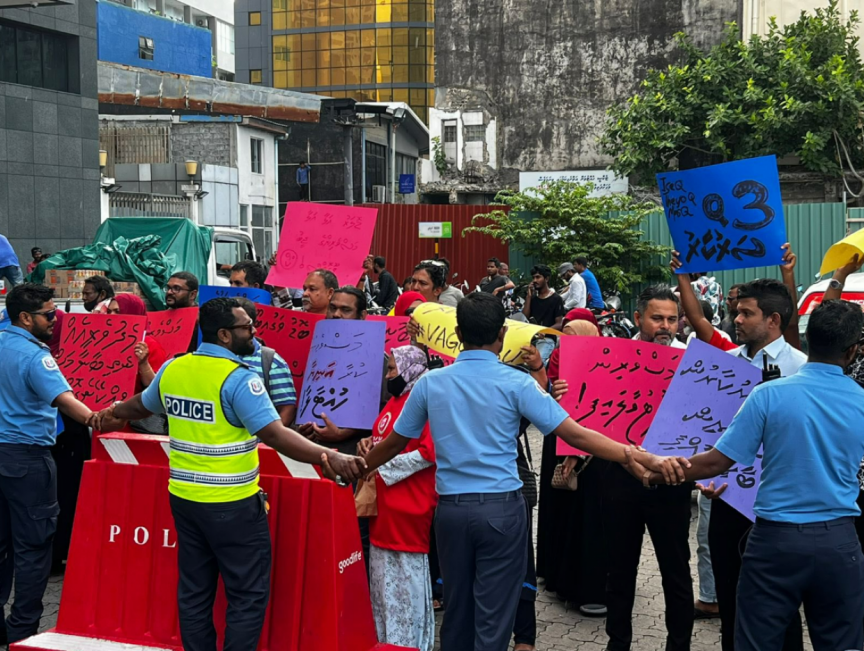 A capture from opposition coalition's protest to draw attention to fishermen's concerns on October 10, 2022. (Photo/PPM)

Ten people were arrested in opposition PPM-PNC’s protest under the name 'Ley Naaru' on Monday evening, to draw attention to the concerns of local fishermen, and to make the government answerable to them.

Although PPM claims that 10 were arrested during the protest – the police have yet to confirm the claims.

However, halfway through the protest, they had left the area.

Participants of the protest were stopped by the police by barricades as they headed towards Republic Square through Boduthakurufaanu Magu. When police requested the participants to move back, some of them refused – which led officers to opt for pepper spray.

Apart from them, fishermen belonging to PPM, and some fishermen who joined the protestors from the area participated in the protest.

The complaints of the protestors were to immediately cease the financial difficulties imposed upon fishermen by the government, and to ensure fair price for fishermen’s catches.

Posters held up by the protestors read that fisheries, the bloodline of Maldivians, has been destroyed by the government. Some of the posters also read that Indian fishermen had taken over Maldivian seas.