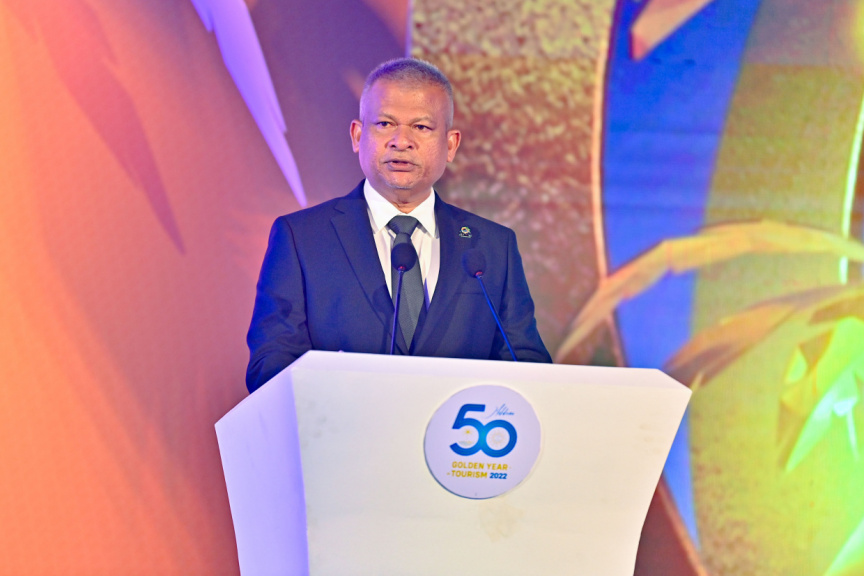 President of National Hotels and Guesthouse Association of Maldives (NHGA) Abdulla Nasheed speaking at the ceremony held to mark the 50th anniversary of tourism in Maldives. (Photo / President's Office)

National Hotels and Guesthouse Association of Maldives (NHGA) on Sunday expressed the significance of establishing a world-class tourism institute in Maldives.

Speaking at the ceremony held at Dharubaaruge to mark the 50-year anniversary of tourism in Maldives, the President of NHGA Abdulla Nasheed said that the good name Maldives has attained through tourism needed to be retained and taken forward.

Hence, establishing a tourism institute that is of the global standard was important, Abdulla said.

Noting that in 1972, it was only USD 447 per head, while by the end of 2019, the figure had increased to USD 10,480. He credited this progress to the ‘three pioneers of tourism in Maldives’, the current Minister of Health Ahmed Naseem, Ahmed Umar Manik (MU Manik) and Champa Hussain Afeef.

He expressed a special thank you for their contribution to the tourism industry.

Moreover, he said that the industry can only be taken to future generations by ensuring its benefits are reaped by people from all walks of life. He thanked President Ibrahim Mohamed Solih for bringing in a law that allowed guesthouses to be developed in the islands while fulfilling the role of a senior Parliamentarian from MDP.

Abdulla stressed that this was a “bright sign” that the individual citizen is reaping the benefits of tourism. He further said that once Hanimaadhoo International Airport is operational, the guesthouse industry will see a further expansion across the atolls.

He expressed his certainty that just as the people of Maafushi enjoy the incoming dollars, people of the country in the north and south will be eager for the same. He then said that soon, people in these regions will be enjoying the true benefits of the industry as well.

In addition to this, he said that he is most hopeful for the day the new terminal in Velana International Airport (VIA) is opened, as this would allow budget airlines to come to Maldives, filling up the guesthouses.

8-year old passes away due to dengue