President: Every soldier's top priority should be to protect all citizens in any situation 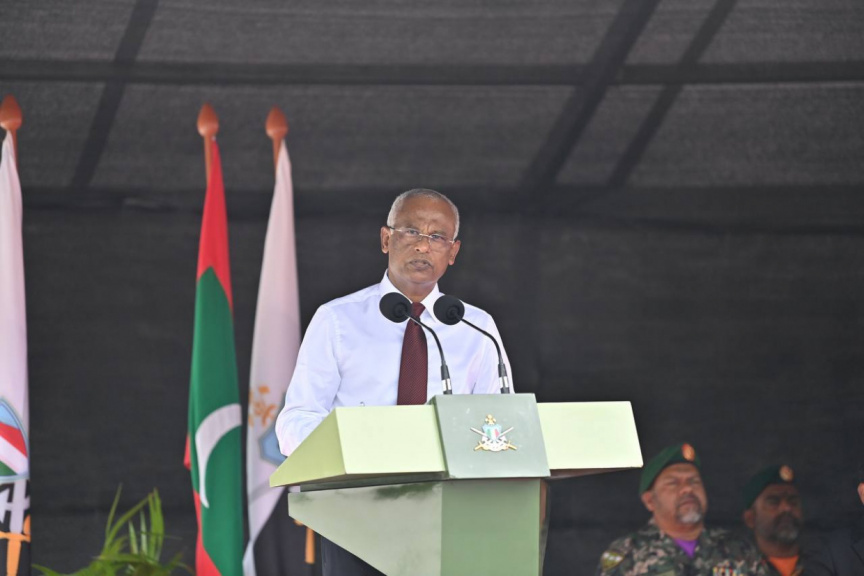 Every soldier's top priority should be to protect all citizens in any situation, says President Ibrahim Mohamed Solih.

He made the comment during the oath taking ceremony of Maldives National Defense Force (MNDF)’s 68th basic training course in Lh. Maafilaafushi on Thursday afternoon.

Addressing the graduates, President Solih spoke of the civic duties of soldiers.

He said the duty of soldiers was to remain steadfast in order to relieve any burden that citizens may face.

He advised the graduates to utilize the skills and the fraternal bond formed during their training for national progress by working toward a unified goal.

President Solih spoke of the role of science and technology in helping armed forces gain an advantage, advised graduating soldiers to take advantage of opportunities.

He said that there were opportunities for young people to advance their careers within the ranks of the armed services and that the army needed more young people with a variety of educational backgrounds.

President Solih said that in modern-day democratic societies, armed forces are used for peacekeeping rather than war, and that regional military forces are actively engaged in maintaining regional stability.

He said the primary responsibility of the Maldivian armed forces is to uphold peace and harmony within the country, and that any action taken by the soldiers to defend the country contributes to the greater goal of regional stability and peace.

The 195 soldiers who graduated MNDF’s 68th basic training course were ceremonially presented with their firearms by President Solih, the Commander in Chief of the armed forces.