Opposition: Do not believe MDP will remove Nasheed as Speaker 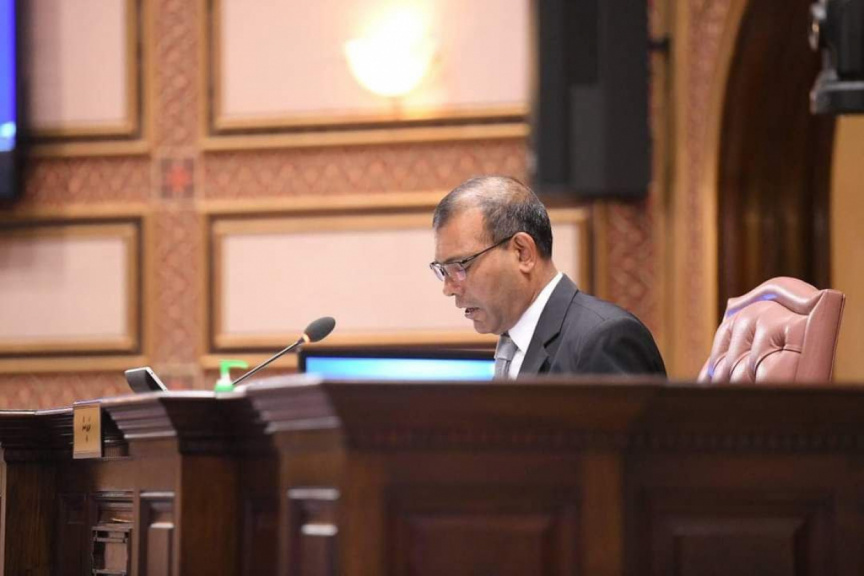 Soon after the arrest of Nasheed’s younger brother, Nazim Sattar, in connection to homosexuality – he claimed to have received four pictures that showed President Solih having sexual relations with a young girl.

However, he has yet to file the case with the police

Meanwhile, numerous members of MDP have expressed a lack of confidence in Nasheed, and have begun to request the removal of him as Parliament speaker.

When contacted by Sun to inquire about the opposition’s views on this, MP Shiyam said that he does not believe MDP will remove Nasheed from the post.

“That might be the sentiment of some members. But do not think MDP will remove Nasheed as Parliament Speaker.”

He went on to state that even if such a thing happens, MDP will yet again elect someone they see fit for the post. He added that PPM will not support MDP in such political decisions.

The parliament comprises of 65 MDP members – of which the majority supports President Ibrahim Mohamed Solih.

Nasheed has previously stated that his relationship with President Solih will never be severed. He also stressed that there was no doubt both of them will be able to work together in the future.

The rift between Nasheed and President Solih has escalated this time over the arrest of Nazim, who was arrested and remanded in connection to the probe of the video leaked online which allegedly shows Nazim engaging in sexual relations with Bangladeshi sex worker, Alamgiri.

In a tweet shortly after Nazim’s arrest, Nasheed said his brother’s arrest was selective and politically motivated to appease hardline extremists in the coalition government. He also said the arrest was made in violation of criminal procedures.

Speaking to Sun regarding the matter, Addu Meedhoo MP Rozaina Adam said that Nasheed currently lacked the requirements a speaker should have in a law-making body of an Islamic nation.

She added that should Nasheed wish to defend his arrested brother – he cannot do so “in that manner” while holding the post of the parliament speaker.