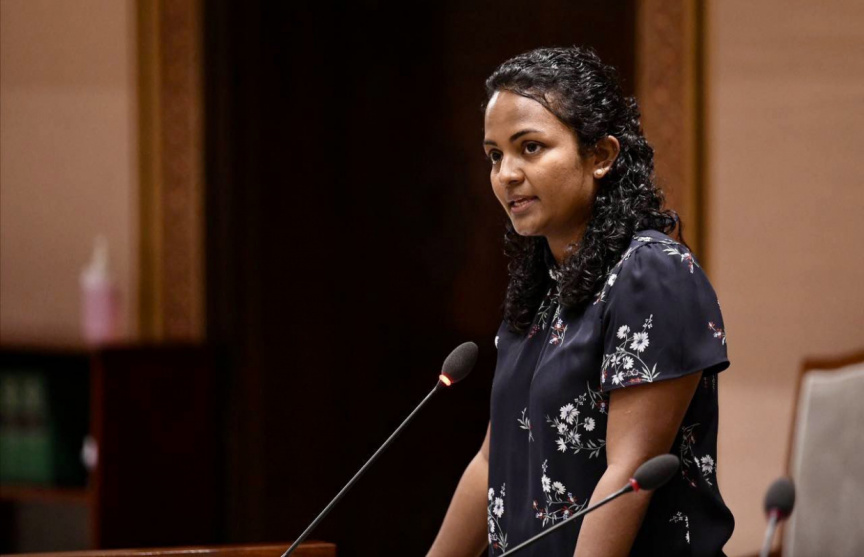 Environment Minister Aminath Shauna speaking at the Parliament regarding the Addu reclamation project on March 6, 2022. (Photo/Parliament)

Minister of Environment, Climate Change and Technology Aminath Shauna said that despite Environmental Protection Agency’s (EPA) Environmental Impact Assessment Report (EIAR) report showing that the Addu reclamation project will cause damages to the environment, the government will not stand in the way of development in the atoll.

During the Parliament sitting on Monday, Maradhoo MP Ibrahim Shareef noted that although the EPA report shows that there will be damages, the project was extremely necessary for the citizens of Addu. He then asked Minister Shauna why the Environment Ministry was trying to stop the project.

Responding to the question, the minister said that she was also Addu and that she was very well aware of the sentiments of the people.

“I know the problems faced by the people of Addu. I know that going on from one generation to the next, there is three-generation living under one roof. I know how much, especially the people of Maradhoofeydhoo and Maradhoo are in need of housing. And I can feel the shortage of land faced by them.

Stating that Addu was the smallest natural atoll in the country, she went on to note that there was no means to generate electricity in the atoll. She also said that we need to deeply think about the consequences of climate change in Maldives.

Additionally, she highlighted that the EIAR from EPA showed that the reclamation project will damage 42 percent of Addu’s lagoon.

She then said that they will proceed will the developmental projects in Addu while being cautious of this.

“I believe that development is something that needs to be done while thinking about how to solve these things mentioned (in the report), climate change, the beauty of Addu, Addu’s environment, and protecting the ecosystem of Addu.”

Furthermore, she said that though the report indicates damages, the ministry will not get in the way of Addu’s development.

While speaking in the Parliament, Minister Shauna revealed that the Ministry of National Planning, Housing and Infrastructure, Environment Ministry and EPA is scheduled to meet and hold discussions regarding this project on Monday, March 6.

EIA will conduct an Environmental Impact Assessment (EIA) on a project that requires it. The EIA will evaluate the anticipated environmental impact of the proposed project and will compile an EIAR based on the findings.