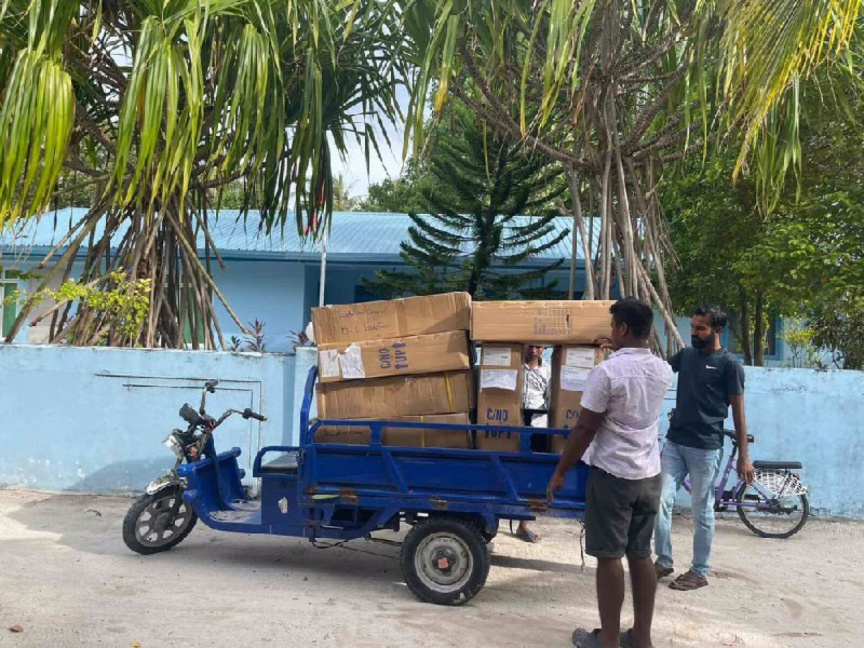 Wheelchairs are delivered to the elderly in N. Kudafari with mobility issues. (Photo/Kudafari Council)

The government has supplied wheelchairs to elderly residents in N. Kudafari who suffer from mobility issues due to old age.

There are eight people between the ages 40-65 years in Kudafari who suffer from mobility issues.

All eight have been presented with wheelchairs.

Kudafari Council’s president Ali Shameem Mohamed told Sun one of his key priorities since assuming office has been to identify people living in the island who require social protection.

He said that the council initiated a survey, during which it uncovered there were some people living in Kudafari who had been bedridden for over three years.

Shameem said the council shared the findings of the survey with Gender Minister Aishath Mohamed Didi and other senior officials at the Gender Ministry.

“All senior officials were there when we went to the ministry. We presented our issues. Minister asked us to send a list of people we have identified. We presented all issues we discovered in our survey separately. We received a good response from NSPA as well. The minister checks for regular updates. The bureau also checked. And NSPA was very fast in supplying the equipment,” he said.

Shameem praised Gender Ministry’s policy of working in close collaboration with all stakeholders.

He said that the Kudafari Council continues to receive full support from Gender Ministry, NSPA and other relevant state institutions for all its initiatives, and expressed hope the council will continue to receive such support.

Milhana Ahmed from Venus in Kudafari, whose father Ibrahim Ali was one of the recipients of the wheelchairs, said it marked the end of a long and desperate wait for the family.

“What happened to my father was he suffered a stroke and was paralyzed in one side, leaving him unable to walk. We were desperate and didn’t know who to turn to. And that the current council came to power and began advocating on our behalf. When my father received his wheelchair I realized that all these services are available. But we just don’t know how to go about to seek it. There isn’t any assurance. I cried of joy when my father received this wheelchair through the council,” she said.

The main livelihoods in Kudafari is fishing, farming and tourism.

Kudafari, an island of 860 people, is a small but picturesque island measures just 0.6 kilometers in length and 0.4 kilometers in width.

Many MDP members in Kudafari signs to MDA

Hospital beds provided to the bed-ridden at Kudafari

Man arrested from Male’ with over 700 beer cans