Nasheed: I can no longer stand in political alignment with the President 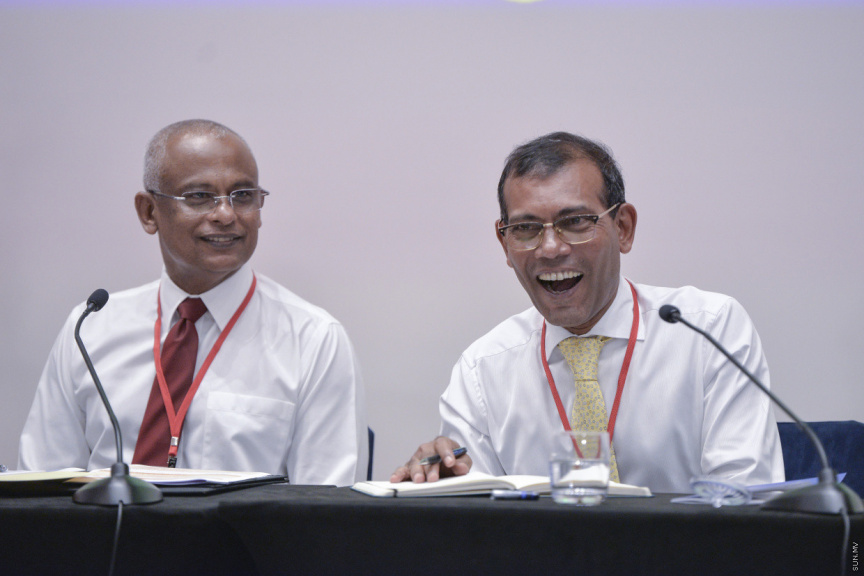 President Ibrahim Mohamed Solih (L) and Speaker of the Parliament and former President Mohamed Nasheed (R). Nasheed is the leader of the governing MDP, while President Solih is his long-time friend and close ally. (Sun Photo/Muzayyin Nazim)

Speaker of the Parliament, former President Mohamed Nasheed has stated he can no longer stand in political alignment with President Ibrahim Mohamed Solih - reasoning differences in political ideology.

Nasheed made this statement via text messages sent to a Whatsapp group of Maldivian Democratic Party (MDP). In his texts, Nasheed noted that the pair had no personal differences – citing that they will always stand together when it comes to personal matters.

Nasheed also requested fellow party members to avoid any acts that may adversely affect the President – and also to set aside personal grudges.

At the time Nasheed has made this statement, rumors have already been brewing that MDP is becoming two factions. While some members of the party have explicitly shown their support to the President, some others have expressed their support for Nasheed.

The rift between Nasheed and the President has been growing ever since Nasheed had told the President his wishes to change Maldives’ system of governance to parliamentary, and become the Prime Minister – via a text message.

Following this, the President had made a statement through Spokesperson of the President’s Office Mabrouq Azeez which acknowledged receiving the aforesaid text message.

No statement has been made by the President or his office regarding the messages sent by Nasheed today.

“If necessary, I will turn to former President Abdulla Yameen for help”

In today’s texts, Nasheed also notably stated that he will consider collaborating with former President Abdulla Yameen Abdul Qayyoom and his party, Progressive Party of Maldives (PPM), should they be open to moderate religious views – adding that he cares little for any negative sentiments MDP members may express on this.

“It does not matter to me if some MDP members are unhappy with this – but if former President Yameen and PPM supports moderate religious views, I will ask for their help," he said.

Nasheed also added that he suspects religious extremism within MDP.

Prior to this, Nasheed has also stated that he believes PPM and Yameen will work together with MDP to campaign for a parliamentary system ahead of the referendum.

Yameen, like Nasheed, had backed a parliamentary system of government back during the 2007 referendum.

However, speaking on behalf of Yameen, People’s National Congress (PNC) leader Abdul Raheem Abdulla (Adhurey) said Yameen supports the decision made by the people in the 2007 constitutional referendum taken to decide a system of government in the Maldives.

In addition to this PPM’s Deputy Leader, Naifaru MP Ahmed Shiyam says his party has no deal to make with MDP citing fundamental differences in principles, which he said PPM is unwilling to compromise.