Nasheed calls for referendum on parliamentary system next year 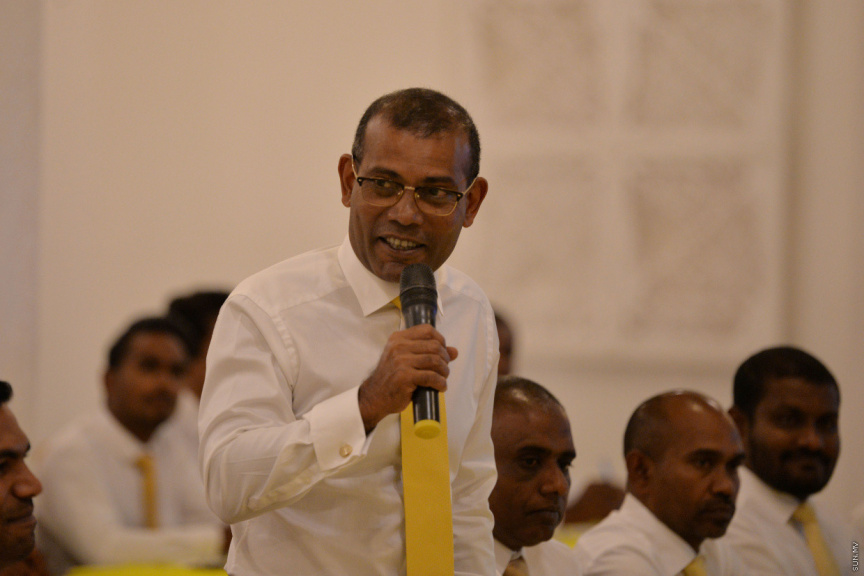 Parliament Speaker, former President Mohamed Nasheed states it would be beneficial to conduct a referendum to decide whether Maldives should switch to a parliamentary system of government next year.

In response to a question during an episode of Ask Speaker on Monday night, Nasheed said he plans on running in the Maldivian Democratic Party (MDP) primary for the next presidential election, but prefers a parliamentary system of government over a presidential system.

Nasheed said on Monday he believes a constitutional referendum should be taken next year to decide whether Maldives should switch to a parliamentary system.

“I believe the governance will improve with a parliamentary system. Its useful to hold a referendum in 2022 to make the change,” he said.

‘WILL WORK WITH YAMEEN TO ESTABLISH A PARLIAMENTARY SYSTEM’

Nasheed also stated that he believes opposition Progressive Party of Maldives (PPM) and former President Abdulla Yameen Abdul Gayoom himself will work together with Maldivian Democratic Party (MDP) to campaign for a parliamentary system ahead of the referendum.

Nasheed also added that he never wished ill for Yameen, who is serving a prison term for money laundering, and hopes for all political leaders to be able to participate in all national elections.

Yameen, like Nasheed, had backed a parliamentary system of government back during the 2007 referendum.

‘I DON’T BELIEVE GOVT. WAS INVOLVED IN THE ATTACK’

Nasheed was also asked about the IED attack outside his residence on May 6, which his own daughter, Meera Nasheed, has described as an “inside job”.

Nasheed said he does not believe the government had been involved in the incident, which the police are investigating as a targeted terror attack to assassinate him.

“I don’t believe, even a little, that the government had been involved in the attack. Everyone knows I, myself, am [part of] the government. The president of my party is serving as president [of the country]. And our party holds majority at the Parliament,” he said.

A homemade remote-controlled IED was strapped to motorcycle parked nearby Nasheed’s residence, and was detonated at 08:27 pm on May 6, just as Nasheed, exited his residence and went to get in his car. Nasheed was thrown to the ground and sustained multiple shrapnel wounds, while three members of his security detail and two bystanders sustained minor wounds.

He was transferred to a military hospital in Germany on May 13, and is now in the United Kingdom for further treatment.