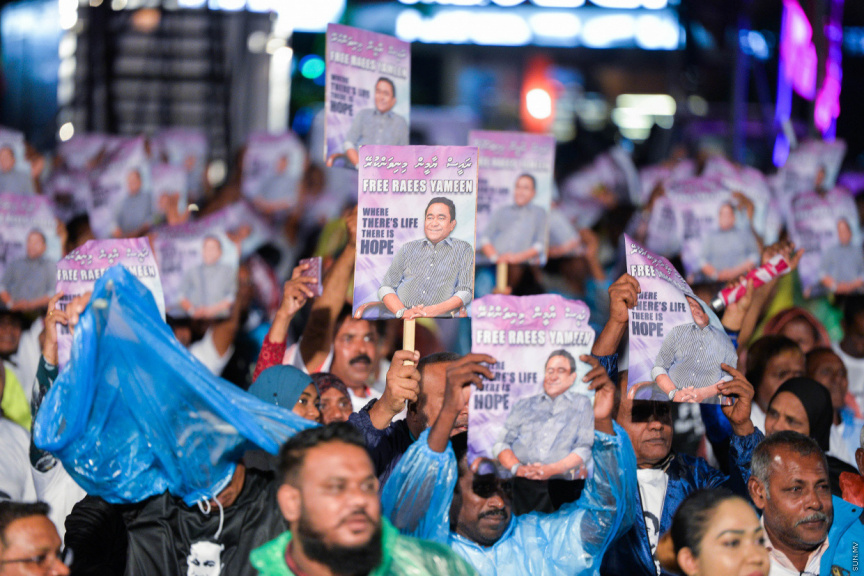 Those gathered for a rally organized by the Progressive Congress Coalition hold up signs calling for the release of former Maldivian President Abdulla Yameen Abdul Gayoom. (Sun Photo/Fayaz Moosa)

The Progressive Coalition has announced protests all across the nation on Friday to seek justice.

The opposition coalition of the government announced in a press conference that a resolution was passed by the coalition to start political activities and had also decided to expand the activity across the nation. The protests are to be held under the banner “Where is justice?”.

Naifaru MP Ahmed Shiyam who is the deputy leader of PPM, speaking in the press conference said, “We will take the initiative to commence a massive, powerful event on Friday, 16:15, in the Maldives, since the public wish to question the government, and ask where is justice?” said MP Shiyam.

Shiyam said that the protests were not to free opposition leader and former President Abdulla Yameen, but because there was no justice for anyone in the Maldives.

PNC deputy leader Ibrahim Shujau said that the authorities will be informed of the protests today which will commence on Friday at the Social Center Area of the capital.

The protests come at a time when COVID-19 cases are on the rise. HPA has also begun to increase safety measures such as public gatherings and curfew.