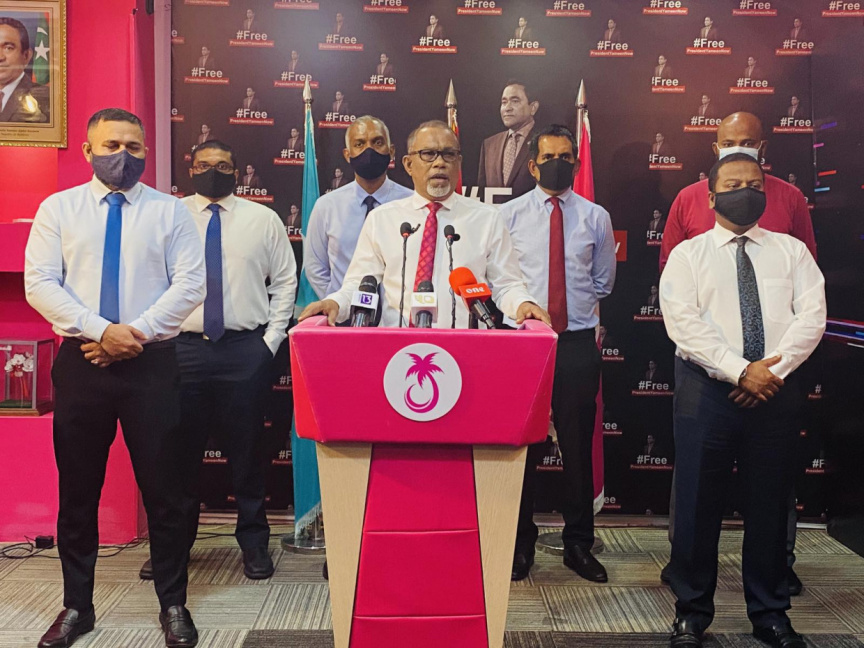 Opposition leaders of PPM and PNC.

Opposition leaders of PPM and PNC have been summoned to the police for a planned protest at sea near K. Maafushi today.

The opposition Progressive Coalition leaders were summoned to the Police at 10:00.

"Leadership confirmed the news to me. Police called the coalition's Secretary General Tholaal and asked to clarify information about the event. Leadership was informed that Police wanted to meet." said Abdul Raheem Abdulla who is the leader of PNC.

Abdul Raheem said that he was not clear why polcie wanted to meet, as the coalition were planning to protest at sea near Maafushi and had no intention of landing on the island.

The protests were light on the issues faced by former President Abdulla Yameen and to increase the calls for his freedom, said Abdul Raheem.

"The program is planned for commencement in Maafushi. Because our leader is currently in prison in Maafushi. So when we begin such an iimportant activity, we planned to begin from where he is." said Abdul Raheem who added that trips will be taken to other islands in the future.

He maintained that the coalition would adhere to the measures and guidelines of HPA during these activities. Opposition coalition members wishing to take part in the protests are requested to attend the MTCC express jetty in Male' City at 12:30.Opp

Doctor warns of being overwhelmed with case increase