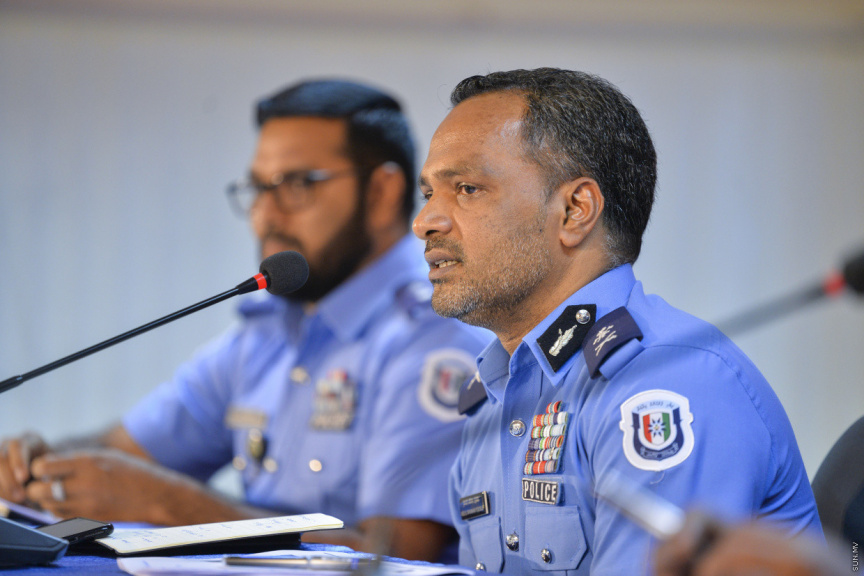 Deputy Commissioner of Police Abdul Mannaan Yoosuf said on Thursday that the police have collected enough evidence in the investigation into the sexual assault which took place on board a safari boat in late June to prosecute the suspects.

The sexual assault was reported to the police at approximately 05:00 am on June 26, after police officers on patrol in suburban Hulhumale’ found a woman – the victim, and two men – the suspects at the Hulhumale’ jetty, and questioned them.

According to the police, the victim told the patrolling police officers that the two men had confiscated her phone and was refusing to give it to her, but upon further questioning, told the police officers that she had gone to a safari boat off Hulhumale’ at the invitation of a friend on June 25, and had spent time with the two suspects on board the boat, and that they groped her without her consent and sexually assaulted her.

She told the police she had jumped overboard for fear they may continue their actions, and that the two men had come after her on a dinghy boat, pulled her out of the water, and then took her to the jetty.

The police arrested the suspects on the spot, but later released from police custody citing “lack of sufficient grounds to keep them detained for the investigation” at that time.

The police held their first press briefing to disclose information regarding the case, three weeks after the incident took place, on Thursday evening.

The press briefing was held by DCP Mannaan, Head of Serious and Organized Crime, Chief Superintendent of Police Mohamed Basheer, and Chief Inspector of Police Mariyam Azma from the Hulhumale’ Police Station – the station leading the investigation.

The press briefing produced little new information. Many of the information had already been disclosed by the police when summoned for questioning to the Parliament’s Human Rights and Gender Committee on July 1.

The new information disclosed was that the police retrieved the victim’s mobile phone from underwater, and that they took statements from 11 people – seven of whom had been on board the safari boat.

The police also said they were engaged in discussions with the Prosecutor General’s Office regarding pressing charges in the case.

In response to questions by reporters, Mannaan said the police have made enough progress in their investigation to prosecute the suspects.

“We believe they can be prosecuted. But that will be decided by the PG. We are engaged in discussions with the PG regarding this,” he said.

When asked by Sun how soon the police expected the charges to be lodged, Mannaan responded that the case will be forwarded to the Prosecutor General’s Office “in no time”.

Speaking to press, Mannaan said the police have no other suspects other than the two men who had been taken into custody from the Hulhumale’ jetty, and that both are suspected of sexual assault.

When questioned why the suspects haven’t been arrested

Mannaan said the suspects haven’t been arrested because the authorities are required by law to complete investigations and forward it to the Prosecutor General’s Office for charges against suspects within 30 days of arrest. He said the suspects were released from custody because the authorities will not be able to prosecute if the police fail to complete the investigation and forward the case for charges within the 30-day period.

“What’s happening is, we need to submit for prosecution within this [30-day] period after the arrest. Failure to, means the case cannot be prosecuted. Therefore, we make arrests after much thought. Now this does not mean we will not arrest suspects where there is reason to believe they may fail to present to court or many destroy evidence,” he said.

He said that while the victim told the police she had been sexually assaulted, they believe a far more serious crime may have taken place, to make her jump overboard.

“The victim told us that she jumped overboard for safety because she faced an act of sexual assault the first time and people were coming at her to commit such an act a second time. We are using the term sexual assault. Our intent is, we believe in the possibility something more serious may have taken place there, that something more serious than assault may have taken place. Therefore, our objective is to investigate this. We will examine this further as part of our investigation,” he said.

When questioned by Sun whether the police suspect the victim may have been raped, Mannaan did not provide a direct answer. He said the suspects are accused of sexual assault.

One of the suspects in the case is the spouse of a parliamentarian, giving rise to allegations of political influence and victim intimidation. Some allege the victim was offered money to change her account.

Chief Superintendent Basheer said the police did not acted outside its standard protocol in dealing with the case. He said the case had been approached in the same manner the police investigate all cases involving sexual violence. He said the police do not believe they had delayed in taking the victim to the doctor, and that the police had not lost any significant evidence in the case.