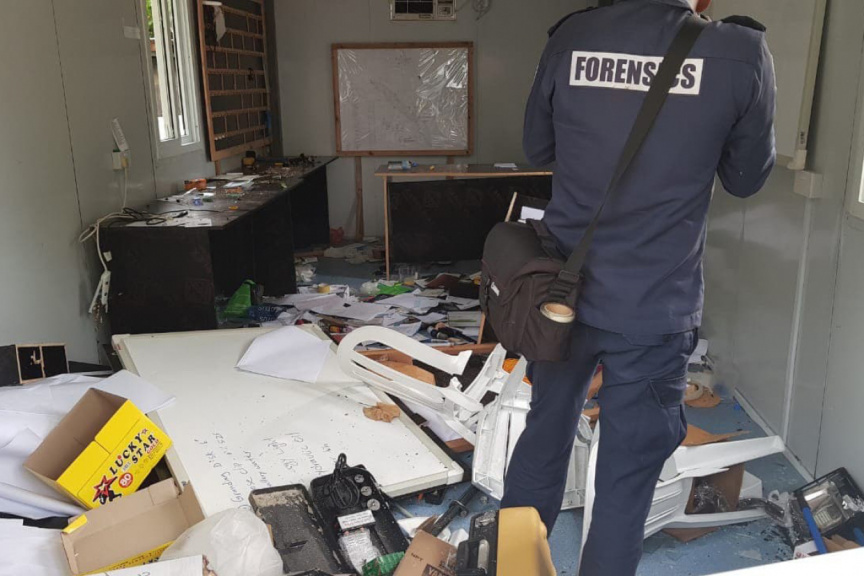 Police officers are pictured at a vandalized worksite in B. Bodufinolhu on July 23, 2020. Around 15 locals were taken hostage by a group of 200 migrants over unpaid wages. (Photo/PSM)

Developers of B. Bodufinolhu, Seal Maldives has rejected accusations by Rix Maldives the contractors of the project, over allegations that it failed to pay the wages of expatriate workers on the island.

The issue went haywire yesterday when the expatriates became violent and took some locals on the island hostage. Police had to intervene and make three attempts before the violence was eventually quelled. The ordeal left some officers with injuries as the expatriates attacked.

However, Seal Maldives soon refuted the allegations. The company’s legal team Advocacy Chambers issued a statement on behalf of Seal Maldives that read that the duty to pay the wages of employees were upon the contractor.

The developers, Seal Maldives said that it had already funded MVR 21 million to the contractors when the wages of employees are to be paid at a rate of MVR 7,000.

“We do not see any reason why they cannot pay around 200 employees with this money. We would also like to note that an internal investigation is underway to find out how and why payments for invoices for 300 employees are made when Lawcraft has clarified that there are 200 employees.” Read the statement by Advocacy Chambers.

The statement also read that employees of Rix Maldives had vandalized heavy machinery, attacked, and halted operations of other workers on the island on three occasions.

Advocacy Chambers said that the developers had informed the contractors to evict the individuals behind the violence and vandalism and to resolve the conflict on May 23, along with photos.

Regarding the statement by Lawcraft which represents Rix Maldives in the matter, Advocacy Chambers said that the agreement stipulated that the contractor would have to remove any employee if the developer decided so, due to disciplinary issues or negligence.

“Further clarification observed that employee insurance was also not arranged by the contractor which is stipulated in the contract. The developer also observed that many employees did not have work visas.” Read the statement by Advocacy Chambers.

The statement also said that it had paid more than the amount stipulated for the project under the agreement and even provided food allowances for non-working days as well.

The developer also suffered a substantial amount of damages from the ordeal that occurred yesterday. An assessment of the damage would be conducted and detailed to the media, later on, read the statement.

The developer also offered an extra MVR 1 million to resolve the matter and even provided solutions to the issue.

“Instead of resolving the matter, the local employees on the island who tried to depart were attacked by contractor’s expatriate employees due to anger over the no one to be responsible for them. They did not allow the local employees to depart and threw metal bars at the speedboat that was carrying the local employees. The law firm has obtained video footage of the incident and would share it with the media if requested.

Police arrested a total of 19 expatriate employees from the island.

Youth attacked on Male’ street being treated at ADK