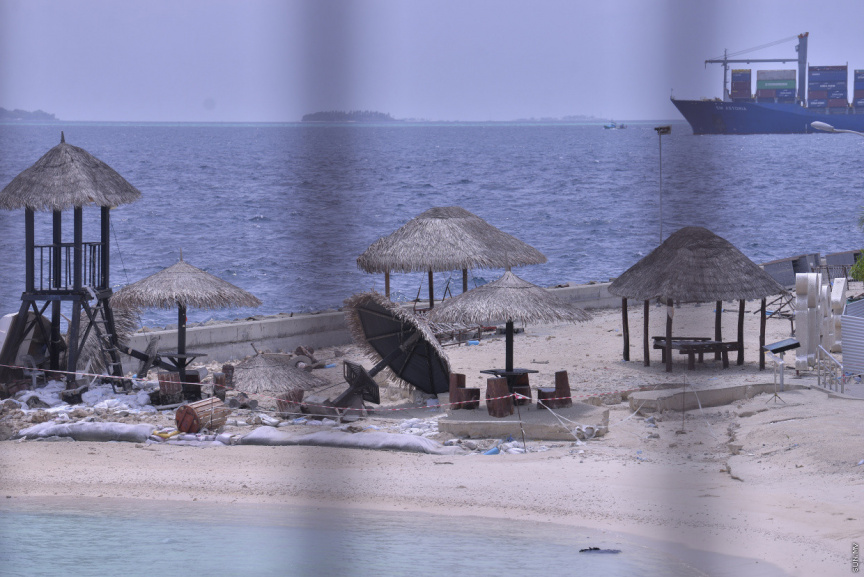 Rasfannu beach lays damaged in the wake of a rainstorm in Male' City on May 16, 2020. (Sun Photo)

The rainstorm which hit Male’ City on Friday has resulted in extensive damages to the Rasfannu beach, a landmark located in the western end of the capital.

Heavy rain, thunderstorms and strong winds affected a large part of central Maldives over the last 24 hours. It also led to Maldives Meteorological Service issuing an orange alert for islands from B. Atoll to F. Atoll – the first time for the service to issue a weather alert advisory higher than ‘yellow’ in its history.

Strong winds felled trees and threw away roofs in Male’.

It also resulted in swell wave surges to cause severe erosion in Rasfannu beach. The beach is now visibly fractured and littered with toppled over umbrellas and waste.

The sand on the Rasfannu beach has been replaced several times due to coastal erosion from swell wave surges.

The Rasfannu beach is an artificial beach which was developed by Maldives Transport and Contracting Company (MTCC) for approximately MVR 40 million in 2016.

The cost of developing the beach and the continued expenditure on repair work had been point of criticism against the former administration.

The pavilions developed on the beach are now rundown. The pavilions had housed three restaurants which were later shut down.

The Rasfannu beach had been a popular gathering spot for people of all ages, but has been closed since the emergence of COVID-19 cases in Maldives.