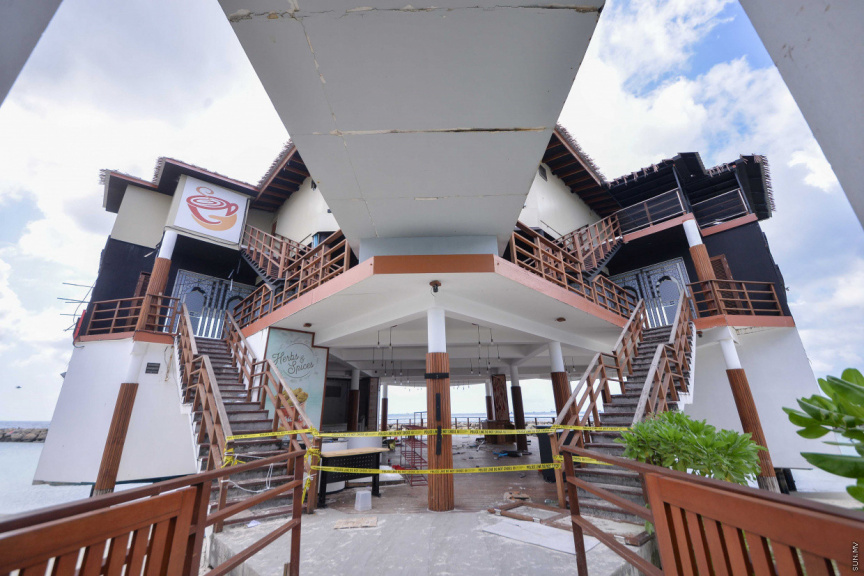 The pavilion built in Rasfannu Artificial Beach in Male' city. The area was developed to base world-famous restaurant outlets initially. However, such a move to bring these brands failed to materialize. (Sun Photo/Fayaz Moosa)

Cafe owners have vacated the premises of the pavilion built in Rasfannu after Male’ Water and Sewerage Company Ltd (MWSC) issued an order to do so.

When contacted by “Sun” and questioned why such an order was issued, Managing Director of MWSC Adam Azim stated that he did not wish to comment due to an ongoing legal process.

Several restaurants were based in the pavilion built during the administration of President Yameen, including outlets of Chickings, Gloria Jeans and Moti Mahal. All of these outlets were closed in November.

The area was developed to base world-famous restaurant outlets initially. However, such a move to bring these brands failed to materialize. The pavilion has also suffered damage, as well as the footbridge built to access it due to a lack of maintenance.

No figure has been released as to how much was spent on developing the pavilion. MWSC did state that it would release a figure once an ongoing internal audit is concluded.