Police open probe into assault on woman in Hulhumale’ clashes 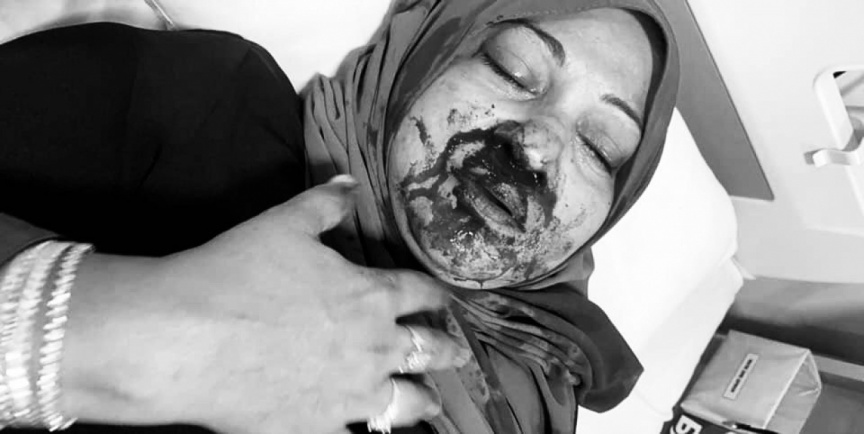 Woman who sustained injuries in suspected case of police brutality in clashes between police and protesters in Hulhumale' on January 17, 2020.

Professional Standards Command of Maldives Police Service has launched an investigation into the allegation a police officer involved in clashes with protesters gathered outside the hideout of a man connected to the rape of a toddler on Friday, hit a woman in the face with a baton.

Photos and videos of the woman lying on a hospital bed with a bleeding nose was shared by her daughter via her Facebook account on Saturday.

According to her, her mother had not been part of the crowd of protesters, but had merely been a bystander watching the protest from just outside her doorstep.

She said that a police offer, after yelling for everyone to remain indoors, had hit her mother in the face with his baton, and pushed both her and her mother into a row of parked bicycles.

“She is not a rapist. She is not a criminal. The father of that innocent child, the one who brutally raped her had a vest and helmet on when they took her. But this is the way the Maldives Police Service treated the “Rayyithu Meeha” who was just outside her doorstep,” she said.

Commissioner of Police, Mohamed Hameed, in a short statement in Twitter this Sunday, said that the police were “aware of an incident where a middle aged woman was allegedly hit by a police officer during the situation near Flat 108 in Hulhumale’”. He said that the Professional Standards Command had launched an investigation into the incident, and that he had personally spoken to the family of the woman – who has also been visited by a team from the Professional Standards Command.

The police, in a statement on Sunday, said that the Professional Standards Command had launched the investigation on Friday.

The incident under review by the Use of Force Review Committee as per standard procedure for reviews of all cases of use of force by the police, reads the statement.

The police had arrested 27 people in the clashes outside Flat 108 on Friday; including one female and 26 males – among them three minors.

The three minors were released into the custody of their family the same night. And the female and four adult males were released after they were cleared of involvement in the clashes.

The man who had been holed up in an apartment in Flat 108 – identified by the police only as a 33-year-old male – has been arrested for negligence in connection to the rape of his daughter, who had yet to reach two years of age. His 62-year-old father and 81-year-old grandfather have been arrested as the suspected rapists.