Reporters, journalists take to street to protest over police brutality 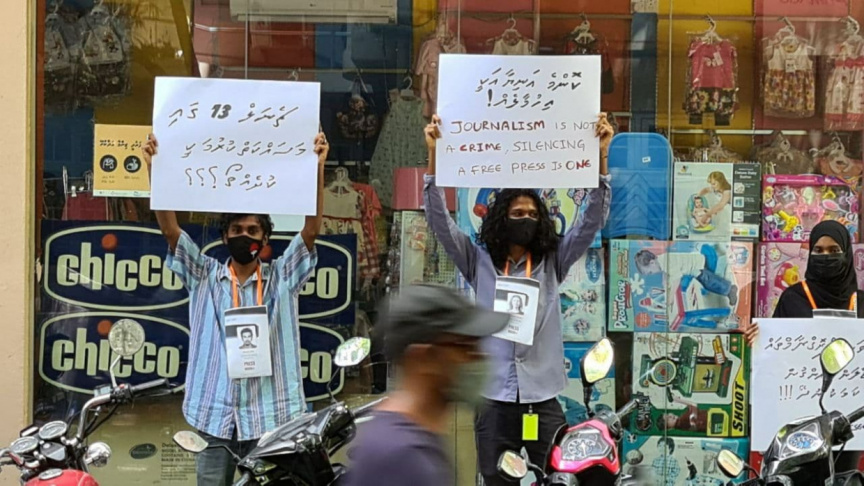 Journalists and reporters protested over police brutality towards the media on February 21, 2021.

Journalists and reporters in the Maldives are protesting in front of the Maldives Media Council (MMC) and the Maldives Broadcasting Commission (MBC) over obstructive actions and physical harm caused by Maldives Police Service officers.

A reporter of the Channel 13 was hurt by the actions of the police while covering opposition protests against the government last Friday. The reporter later required treatment from the hospital for injuries sustained.

Two other reporters of the same channel were also arrested last night after they were forcefully taken out of a cafe in Male' City by police officers. They were both later released.

This has led to some reporters and journalists from different outlets protesting in solidarity in front of the state authorities overseeing the media. The main concern is over police brutality and obstruction of free media. Another concern by the protesting reporters was the lack of action and justice for such actions.

Some reporters called on the government not to treat them as to how Raajje TV was previously treated. They also called to stop the harassment of Channel 13 and its reporters. The protesters observed social distancing as they were protesting in front of the G. Billoorijehige, which houses the MMC. Posters and placards were also used by the protesters who were on the pavement of the street.

The protesters later met with the President of the Maldives Media Council Shahubaan Fahumy and Maldives Broadcasting Commission Mariyam Waheeda to voice their concerns. Both pledged to do more to protect journalists and reporters and fight for the rights of the media.

The Maldives Journalists Association (MJA) has also condemned the brutality by police towards reporters of Channel 13. The MJA also called to investigate the matter.