Allegations of police brutality in dispersing protests in Male' City 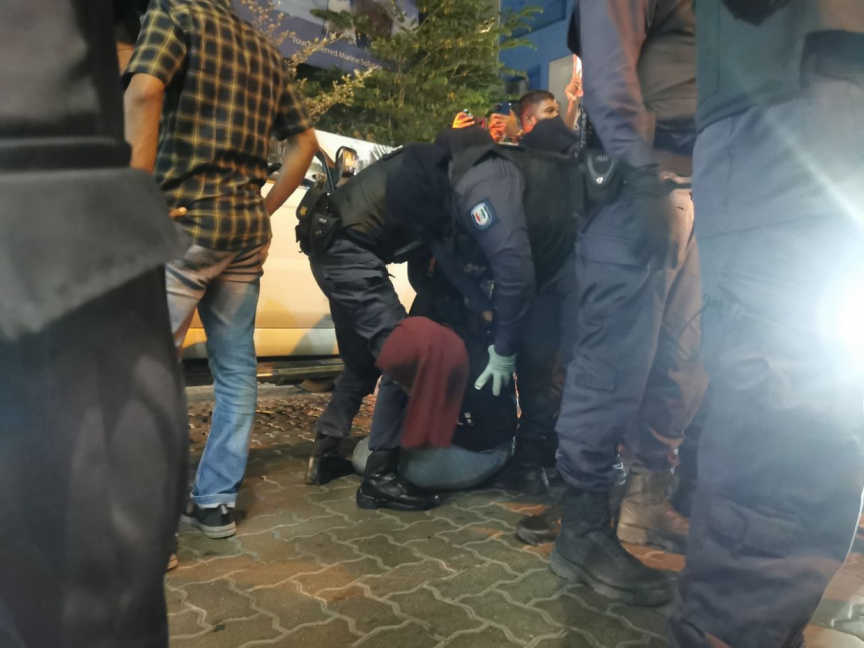 Police using force to disperse protesters in May Day protests of 2021. The protests were against workplace sexual harrassment. (Sun Photo/Fayaz Moosa)

Allegations of police using disproportionate force to disperse protesters near Rasfannu Beach last night have been made.

Protesters took the streets of the capital last night on the occasion of May Day, to protest against sexual abuse and harassment in the workplace. The protesters used megaphones and placards to voice their concerns. Participants of the protests, who were mostly youths, maintained social distancing and wore masks during the protest.

Police dispersed the protesters under the HPA orders prohibiting public gatherings of more than five people in the city due to the COVID-19 situation.

Protesters marched towards the Majeedhee Magu from the Rasfannu Area when police used force to disperse them.

Video footage of the protesters being pepper-sprayed in close proximity as well as videos showing injuries sustained due to police actions have been made public on social media.

There were also allegations that journalists covering the protests were harmed and disrespected by officers who used profanity towards them.

Police, later last night, issued a statement saying that action would be taken against the officers involved last night if they were found to have violated any rules and procedures related to crowd control.

The Professional Standards Command as well as the Use of Force Review Committee of the police will also be making a review of last night's conduct according to the statement. Commissioner of Police Mohamed Hameed has also announced that he had ordered an inquiry into last night's policing of the protest.

Allegations of police brutality against a minor probed