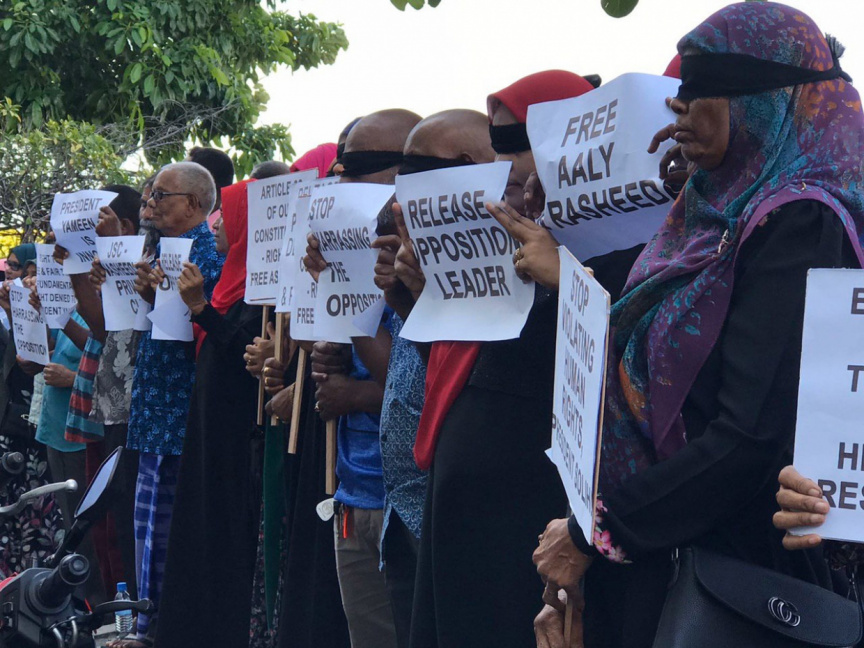 Human Rights Day being observed this Tuesday comes as former President Yameen serves a five-year sentence for money laundering. The opposition has called it a political conviction, and continue to demand his freedom.

Yameen’s supporters gathered for a demonstration outside the UN headquarters located in Boduthakurufaanu Magu this Tuesday afternoon. They appeared with their eyes blindfolded with a black cloth, and holding up signs calling for Yameen’s freedom and an end to political oppression.

PPM spokesperson Heena Waleed told Sun that it had been a peaceful demonstration staged with the purpose of drawing attention of the international community towards the concerns of the opposition.

“President Yameen is in prison because of an unjust and wrongful conviction. He has been denied his human rights. And demonstrations calling for his freedom are being obstructed and protesters being arrested. We held this to draw attention to that,” said Heena.

The police have made several arrests during the nightly demonstrations being staged by the opposition. Protesters arrested in these demonstrations are released a couple of hours later.

An amendment to the Freedom of Assembly Act enacted during former President Yameen’s administration bans demonstrations in Male’ City without prior permission from the police. The amendment has yet to be repealed and continues to be in effect.

The former President was sentenced to five years in prison and fined USD 5 million after the Criminal Court found him guilty of laundering USD 1 million in acquisition cost due to MMPRC for the lease of G. A. Vodamula.