President to UN: This is the end of years of self-imposed isolationism 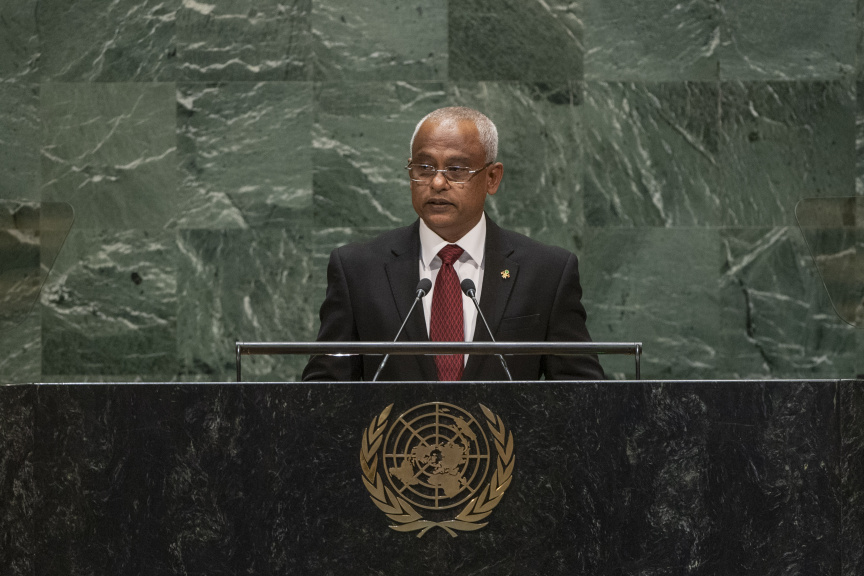 President Ibrahim Mohamed Solih has announced an end to years of self-imposed isolationism by Maldives in his address at the 74th United Nations General Assembly.

Delivering Maldives’ annual general debate statement to the UN General Assembly on Tuesday, President Solih said that Maldives had been in a downward spiral toward autocratic rule since the country’s first democratically elected government was unceremoniously overthrown in 2012.

“The judiciary was hijacked, parliament brought to a standstill, institutions of state co-opted and the press gagged. Political opponents were constantly threatened and opposition leaders either jailed or exiled. Many in the international community spoke out against this reversal. As is the wont of autocrats, the regime turned its back to the world. We left the Commonwealth of Nations, insisting its calls for democracy in the Maldives was an affront to our sovereignty. Isolationism became our default foreign policy,” said President Solih.

He said that the Maldivian people, through sheer willpower, reversed the downward spiral towards autocratic rule and rekindled democracy in Maldives at the presidential elections in 2018.

“That we won the election last year in the face of such adversity, against odds that seemed insurmountable, is an immense credit to the Maldivian people,” said President Solih.

He said he did not take his responsibility as Maldivian President lightly.

“There is much that needs to be done. From embedding good governance, to delivering justice. From educating our young people, to uplifting our most marginalized. From creating opportunities for businesses, to leveraging the benefits of new technology. From protecting our fragile ecosystem and coral reefs, to building a vibrant Islamic society that is just and modern in its outlook,” said President Solih.

Noting that justice was crucial for national development, the President highlighted on the government’s transitional justice program to redress human rights abuses, investigate murders and enforced disappearance, stamp out corruption from all levels of government, and reform the police and the judiciary.

“Meaningful democracy is about more than just holding elections, it’s about involving citizens in the decision-making process; which is why we are working on legislation to decentralize our governance structures and devolve power to our local communities,” he added.

He said that the issues required collective and strong action.

“This is why on the international front, we have reaffirmed old friendships long-neglected and commenced new ones. We have begun the process of re-joining the Commonwealth of Nations. It is our intention to be a good international partner. To be part of a shared solution to the pressing issues of our time, from climate change, to fighting the scourge of terrorism,” said President Solih.