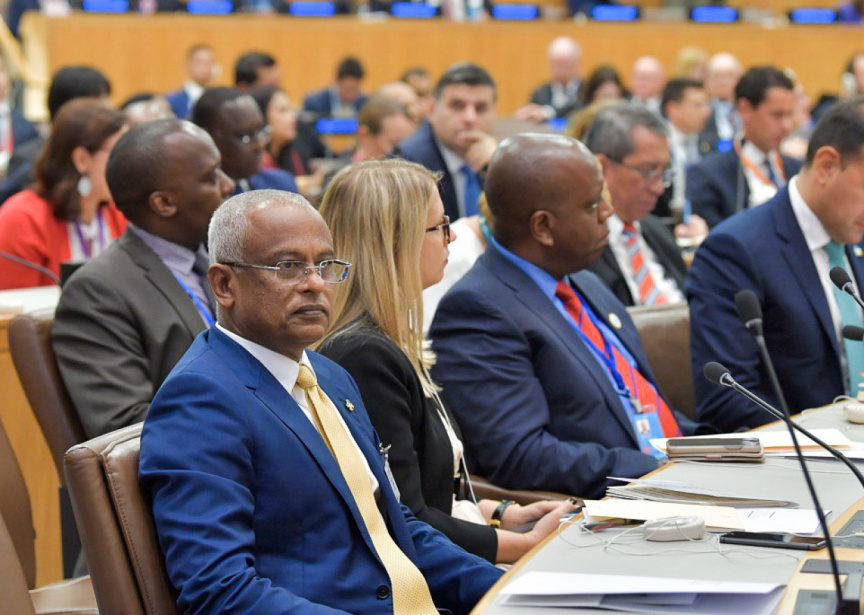 Maldivian President Ibrahim Mohamed Solih has urged the international community to implement greater measures to counter the use of internet for violent extremist and terrorist purposes.

He made the appeal while addressing the Leaders’ Dialogue: Strategic Responses to Terrorist and Violent Extremism held as part of the ongoing 74th United Nations General Assembly last Monday.

Opening his address, President Solih said he believed conventional security measures to be inadequate in the fight against terrorism because it failed to address the root socio-political causes which fostered extremism; racism, xenophobia and hate speech.

“I call on all governments to take steps to curtail racism, xenophobia and hate speech,” said President Solih. “For our part, we are committed to working with the international community, and with companies specializing in digital technology, to prevent the internet being used as a tool to promote hateful agendas.”

He praised efforts by several governments to collaborate with tech companies to remove extremist content online, and announced plans by the Maldivian government to implement similar measures.

“The Maldives’ government will be implementing similar measures to ensure that the internet is not used as a platform to spread hate and encourage violence,” said President Solih.

He highlighted on the case of local journalist Ahmed Rilwan Abdulla who had been abducted and killed by a local group affiliated with Al-Qaeda after being subject to multiple death threats on social media in 2014.

He described the killing as a lesson learned by Maldives on the dire consequences of failure to address online hate speech.

“It is one of my government’s highest obligations to ensure that no other family in the Maldives has to endure such heartbreaking tragedy,” said President Solih.

Speaking of national-level measures to prevent and respond to terrorism, the President highlighted on the controversial amendments proposed to the counter-terrorism act.

He said that the legislative amendments would help strengthen Maldives’ ability to halt terrorist activity without compromising fundamental rights and freedoms granted by the constitution.

President Solih was also joined at the conference by the King of Jordan, the President of France, the Prime Minister of New Zealand and the UN Secretary-General.