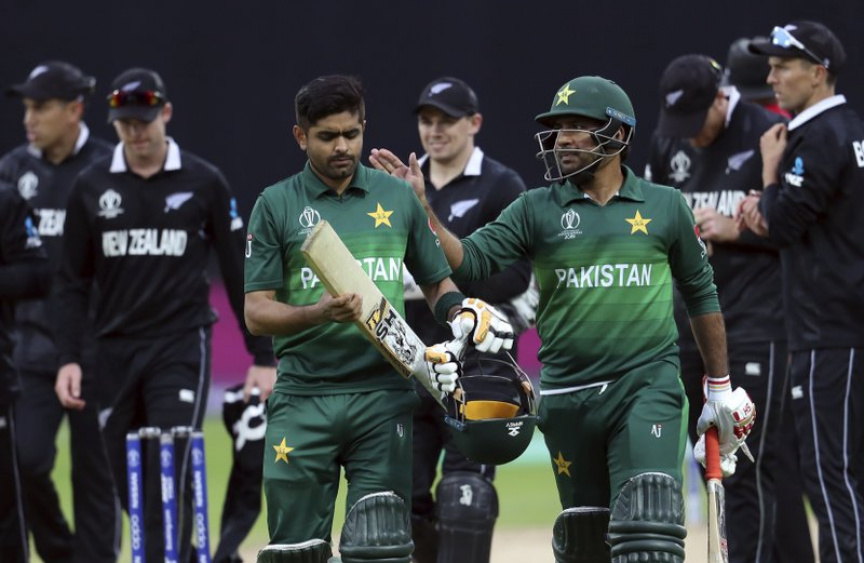 Pakistan's captain Sarfaraz Ahmed, right, pat on the shoulder teammate Babar Azam for scoring a century at the end of the Cricket World Cup match between New Zealand and Pakistan at the Edgbaston Stadium in Birmingham, England, Wednesday, June 26, 2019. (AP Photo/Rui Vieira)

It was the Black Caps’ first loss in the tournament following five wins and a washed-out game against India.

For some optimistic Pakistan fans this campaign is looking very familiar.

Imran Khan’s team in 1992 also had only two wins in its first six matches — with an identical record to the 2019 Pakistan team — and went on to win the title.

For now, every boundary — 11 of them from Babar — produced a huge roar and a sea of green flags in the stands as an overwhelmingly Pakistan-supporting crowd had a day to remember at Edgbaston.

“It’s difficult to bat on this pitch,” Babar said. “It’s spinning a lot.”

Babar shared a fourth-wicket partnership of 126 with Haris Sohail, who was run out by Martin Guptill for 68 in the penultimate over after hitting five fours and two sixes. Babar also put on 66 for the third wicket with Mohammad Hafeez (32)

Pakistan moved level with Bangladesh on seven points, one point behind fourth-place England, which has lost its last two games. The top four in the 10-team league stage advance to the semifinals.

New Zealand is still in a strong position with 11 points but wasted a chance to retake the lead and secure its place in the last four. It now has difficult games left against defending champion Australia and England.

The New Zealanders chased down South Africa’s 241-6 on the same Edgbaston wicket a week earlier. Pakistan, which is not seen as a run-chasing specialist in this format, also went to the last over of the match on Wednesday but on this occasion it was much more comfortable.

Pakistan started its chase quickly — maybe too quickly — on an overcast day with the floodlights on. Trent Boult (1-48) won the battle of the lefthanders when opener Fakhar Zaman (9) was caught by Guptill after an edge went high into the air with the total on 19.

Pakistan was 43-1 after the first powerplay. Guptill then did even better with a diving catch forward to dismiss Imam-ul-Haq (19), who was unable to control a hostile, rising delivery from Lockie Ferguson (1-50), making it 44-2.

There was a lively battle between bat and ball in the 15th over. Hafeez hit Ferguson for two fours, but the fast bowler also hit the batsman on the grille of his helmet.

Pakistan began to accelerate the run chase and the 24-year-old Babar reached a landmark — becoming the second fastest man after South Africa’s Hashim Amla to compile 3,000 ODI runs, in his 68th innings.

Babar and Haris hit nine off one Colin Munro over and 10 off the next from Kane Williamson.

The pair reduced the target to 23 from five overs, 13 in three overs, and 4 in 12 balls before Haris was run out. It was then left to skipper Sarfaraz Ahmed to hit the winning boundary.

Earlier, Jimmy Neesham and Colin de Grandhomme combined to revive New Zealand’s innings with a 132-run partnership for the sixth wicket after captain Williamson had elected to bat first.

Neesham struck an ODI-best 97 not out from 112 balls. He hit five fours and three sixes, including smashing the last ball of the innings over the ropes.

De Grandhomme (64) was run out, too slow against Mohammad Amir’s throw while going for a second run.

“I think you’d be pretty naive to expect to go through the whole tournament unbeaten,” Neesham said. “There’s too many quality teams to expect to win every game. We prepared for a tournament where we’d probably lose one or two games, but for us it’s all about making it to the semifinals, (when) you’re only two good games away from lifting the trophy.”

Pakistan next plays last-place Afghanistan on Saturday before finishing the group stage against Bangladesh on July 5 with a potential semifinal place at stake.