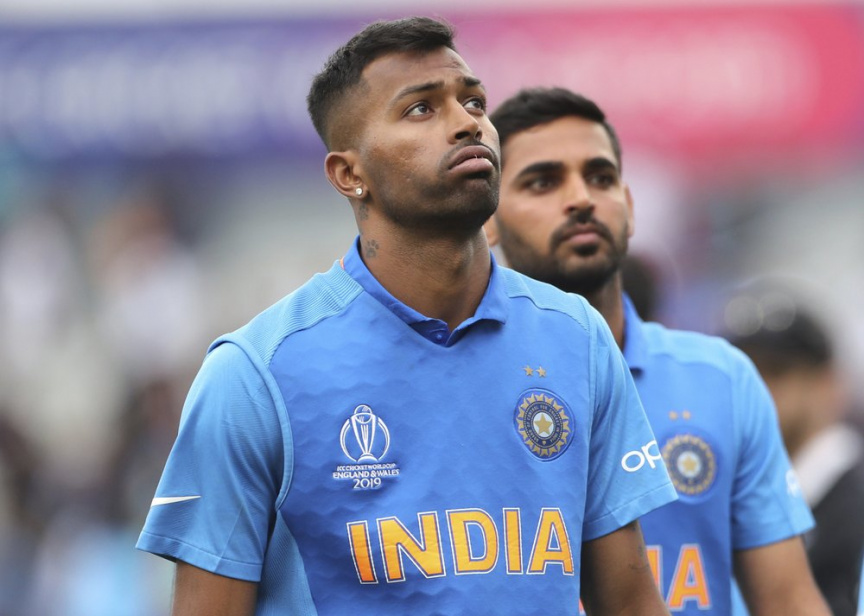 It also moved New Zealand, thriving once again as the underdog, back into another final — this time on the other side of the world.

India never recovered from an unprecedented top-order collapse that plunged the team to 5-3 — the top three of Rohit Sharma, KL Rahul and Virat Kohli were dismissed for 1 each — then 24-4 as it chased 240 to win at Old Trafford on Wednesday.

MS Dhoni (50) and Ravindra Jadeja (77 in 59 balls) gave the Indians hope by putting on a World Cup-record 116 for the seventh wicket, but India was dismissed for 221 with three balls remaining to give New Zealand an 18-run win.

“To go out on the basis of 45 minutes of bad cricket is saddening,” said Kohli, India’s captain and the biggest superstar in world cricket. “It breaks your heart.”

Kohli thought 240 was “chaseable on any surface,” only to be one of the batsmen bewitched by the seaming and swinging deliveries of New Zealand strike bowlers Matt Henry and Trent Boult.

Sharma, the top run-scorer at the World Cup with 648, lasted four balls before edging Henry to wicketkeeper Tom Latham. Kohli lasted six balls before getting trapped lbw by an inswinger from Boult, a review showing the ball would have clipped the bails and leading Koli to throw his bat into the air in disgust.

Eleven deliveries, three wickets, one run. And one devastated nation.

It was the first time in international history that a team lost its first three batsmen all for 1.

“It was mayhem out there with the new ball,” Boult said. “It was a dream start for us.”

Kohli acknowledged it was the key part of the game.

“The way they bowled with the new ball, moving it around, it was an outstanding skill level on display,” Kohli said.

When Dinesh Karthik was removed by an amazing, one-handed catch by a diving Jimmy Neesham, India was 24-4 at the end of the opening powerplay — the lowest score after 10 overs this tournament — and reeling.

It still needed more brilliance in the field to see off India, which was seeking a fourth appearance in a World Cup final.

Dhoni, an expert finisher, anchored one end — too much for some exasperated India cricket observers — and allowed Jadeja to unload at the other. Jadeja hit four fours and four sixes, all straight down the ground, to move India into a position where the game was still potentially up for grabs with three overs left and the team needing 37 more runs.

Jadeja went for another six off Boult with 14 balls remaining, only to sky it high and straight into the safe hands of New Zealand captain Kane Williamson.

Then Martin Guptill, with only one stump to hit from his side-on position, took aim and ran out Dhoni by a matter of centimeters as the India veteran raced back for a second run.

It left India needing 24 off nine balls and it proved too much.

“You finish No. 1 in the (group) table and then a spell of bad cricket and you are out of the tournament completely,” Kohli said. “But you have to accept it. It’s happened to us before and we have all come out better cricketers because of these setbacks.”

While the Indian players head home, no doubt to much soul-searching and reflection by their cricket-loving public, the New Zealanders head to Lord’s on Sunday for a match against either England or Australia.

The second semifinal is at Edgbaston on Thursday. If Australia wins, it will be a repeat of the 2015 final won by the Australians in Melbourne.

The Kiwis will be underdogs against either England or Australia. Just like they were before the semifinal against India. And just like they were after scoring 239-8 in their 50 overs, having adding 28 runs in 3.5 overs on resuming at 211-5 after rain ended play prematurely on Tuesday.

It necessitated the use of a reserve day, meaning Old Trafford was two-thirds empty at start of play Wednesday and not full at the gripping finish.

The way the chase panned out vindicated Williamson’s attritional approach to batting on difficult conditions, and highlighted just how dangerous his bowling attack will be in the final, especially if there is cloud cover.

“Anybody can beat anybody,” said Williamson, repeating his mantra from before the semifinal.

And look how it turned out.