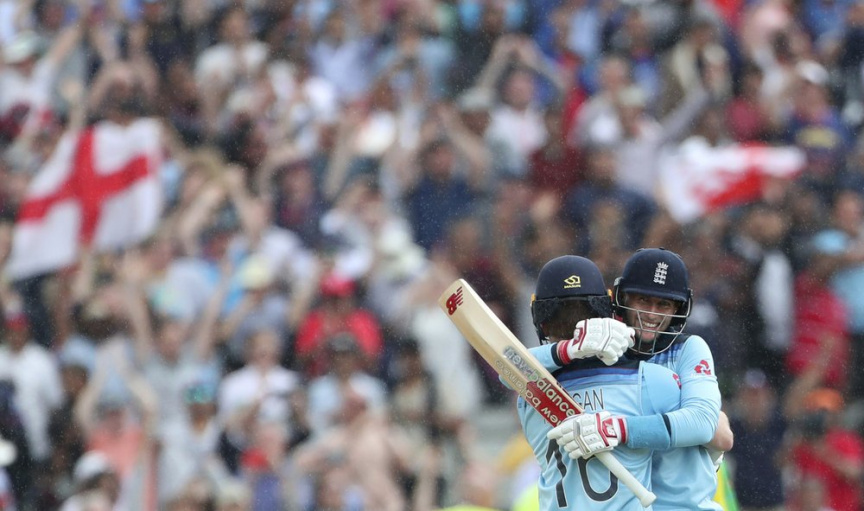 LONDON (AP) — England captain Eoin Morgan keeps a diary that serves as a reminder of the four-year journey his team has made, from no-hoper to being within one victory of winning the Cricket World Cup.

Some of the entries in the early part of 2015 will make for brutal reading.

Others, particularly over the last couple of years, will bring a smile to his face and a feeling of pride.

One day will have been circled from the outset: Sunday, July 14, 2019. The World Cup final at Lord’s. Morgan’s and English cricket’s date with destiny.

“If you had offered us the position,” Morgan said, “to play in a final the day after we were knocked out of the 2015 World Cup, I would have laughed at you.”

Yet England will be there, walking out at the home of cricket as favorite against New Zealand in a match that will crown a first-time winner of the sport’s biggest prize.

And it’s apt that the Black Caps are England’s opponents on Sunday, as they were the yardstick Morgan wanted his team to be measured by.

Quite frankly, the one-day game in England was a mess four years ago, light years behind the rest of the world. There was no plan in place, the team had no identity, the selection was all wrong.

Hence the embarrassment that came to be the 2015 World Cup campaign.

England changed captains right before the tournament — Morgan was appointed in place of the axed Alastair Cook — and selected players from the test team, like batsman Gary Ballance, who shouldn’t have been anywhere near the ODI lineup.

The result? Losses to New Zealand, Sri Lanka and Bangladesh which meant England failed to advance from the group stage.

The country howled in anger. Morgan felt at “rock bottom.” It was time for an overhaul of the English game, as this couldn’t happen again at the 2019 World Cup on home soil.

A new director of cricket was hired, former England opener Andrew Strauss. A new coach was hired, and an Australian at that: Trevor Bayliss. And a new approach was implemented, straight from the New Zealand playbook.

The one-day team — often forgotten about in a country where test cricket is king — would be front and center. The players would be white-ball specialists, play aggressive cricket, and have fun doing it.

“In 2015 we were way off the mark, we struggled against the top teams, and the teams that sat below that,” Morgan said, “so there was quite a drastic change in the way we played and the way we looked at playing our 50-over cricket.”

The impact was instant. In England’s first competed ODI after the 2015 World Cup, the team scored a national-record 408-9 against New Zealand. It was only the third time England had scored more than 350 in ODI history, and it has done it 17 more times since, including two world-record totals: 444-3 against Pakistan in 2016 and 481-6 against Australia last year.

The English have won 15 of their 19 multi-game ODI bilateral series since 2015, including both against New Zealand, 3-2. Three of the top four batting scores in England’s ODI history have come since 2015, opener Jason Roy making two of them.

England supplanted India as the No. 1 side in the ODI rankings in May 2018, keeping that status through to this World Cup.

Winning the World Cup in front of its own fans would be the perfect way to complete the journey.

“As a team, we have learnt to enjoy ourselves,” Morgan said. “Sunday’s not a day to shy away from, it’s a day to look forward to.”

Fittingly, Morgan scored the winning runs as England hammered Australia by eight wickets in the semifinals on Thursday to reach the title match. Born in Ireland, Morgan is the steely and unflustered face of England’s one-day team, a protector of his players, a role model when it comes to discipline and professionalism.

“Morgs is as cool as ice with everything he does,” England allrounder Chris Woakes said.

“He has led from the front, in terms of the way the batsmen have played in this team. They take the attack to the bowlers, they never sit off. And the guys have showed that over the last three years, in particular. He has led that. He has decided from that moment that was the way this team should play.”

With England’s cricket games only showed on subscription TV at home for the past 14 years, Morgan’s team hasn’t gone to the heart of the nation. Players like Woakes aren’t household names.

A deal has been cut so that the final will be on free-to-air television on Sunday, giving the whole country a chance to witness the culmination of this England team’s journey to potential greatness.

“Very cool,” said Morgan, as chilled as ever.