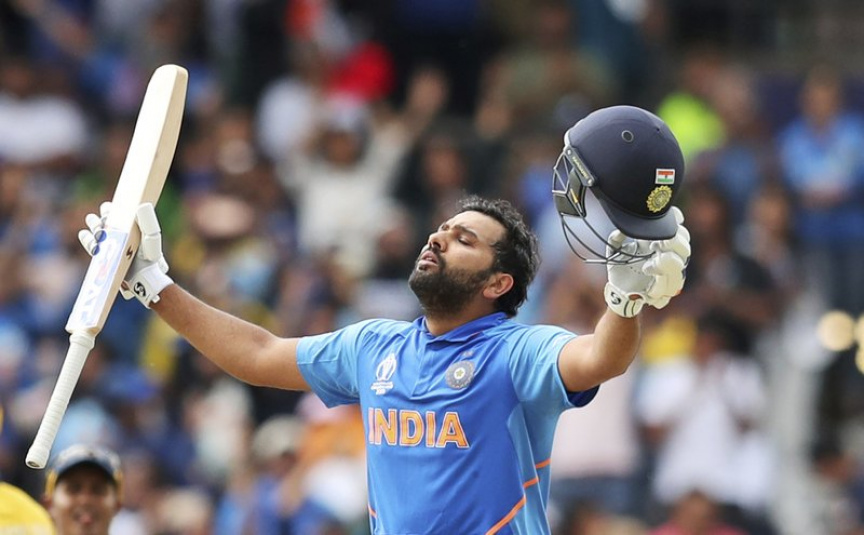 This, Rohit Sharma, must be the biggest highlight of an incredible career.

“No, not yet,” he said with sincerity. “If we win the World Cup it would be.”

That’s two more wins away, starting with the semifinals next week, after India completed the group stage by thrashing Sri Lanka by seven wickets on Saturday, and ended up first in the 10-team standings.

Sharma said the trophy trumped his milestones, for now.

“You have to wait four years for this,” he said. “The job for us is to go and win the finals, the semifinals before that. As long as that is not accomplished, no matter how many runs you score in the tournament or how many hundreds you get, you won’t feel satisfied."

Sharma isn’t overly emotional in his century celebrations. He raises his arms, basks in the applause, acknowledges his teammates and the thousands of euphoric India fans, hugs his batting partner, then gets set for the next ball.

But it’s become ritual at this World Cup. Five times in eight matches, the last three in a row.

Sharma’s 103 from 94 balls in India’s successful chase of 265 separated him from Kumar Sangakkara’s record four hundreds in 2015.

Sharma and fellow opener KL Rahul, who made 111, his first hundred of this tournament, combined in a tournament-best stand of 189 in 31 overs to propel India’s charge.

Sri Lanka recovered from 55-4 to post 264-7, thanks largely to Angelo Mathews’ 113, his third career hundred, all of them against India.

The total was considered challenging on a dry, used Headingley pitch. And India had failed in three of its last four chases.

But thanks to Sharma and Rahul, who blasted 25 boundaries and three sixes between them, India knocked off the winning runs with 39 balls to spare. After losing to England last weekend, India rebounded from its first loss with wins over Bangladesh and Sri Lanka and was top of the standings.

“We wanted to play good cricket but we didn’t expect to do this well heading in to the semis. That’s what hard work gets you,” captain Virat Kohli said. “I am really proud of this team as a captain, they are amazing people.”

India will play New Zealand in the first semifinal on Tuesday in nearby Manchester. Their group match was washed out. India didn’t know who its next opponent was until Australia lost to South Africa to finish group action late Saturday.

“The opposition (in the semifinals) has never mattered,” Kohli said.

“We don’t focus on what they bring to the table. If we play well, we can beat anyone. If we don’t play well, anyone can beat us.”

Sharma and Rahul wasted no time in the chase. They needed 41 balls to post India’s fastest first 50 of the tournament.

They averaged 72 in five previous opening stands, and blew past that in the 13th over.

Sharma brought up his third consecutive century — matched only by Kohli for India — with a pull to the square leg boundary, his 14th four. Two overs later in the 31st, Sharma dished straight to the mid-off fielder and was out.

At this World Cup, Sharma has hit 122 not out against South Africa, 140 against Pakistan, 102 against England, and 104 against Bangladesh.

“I’m not thinking of milestones,” Sharma said. “If I play well these things will happen on the way.

“I have learned from my mistakes in the past. I don’t go in to a match thinking of hundreds. Every day is a new day.”

Rahul’s form had been promising a big score since he’d stepped into the opener’s role after Shikhar Dhawan was sidelined by injury. Rahul finally went on and got to three figures in the 39th over. His hundred came from 109 balls.

He was out with victory practically in India’s grasp, gloving an edge behind. His wicket gave Lasith Malinga his 56th in World Cups, and outright third on the tournament all-time list.

Malinga, playing his last match in his fourth World Cup, was obviously chuffed.

“He was the man behind the World Cups. We will miss him but everyone has to end their chapter. Now is his time. We have to find a new guy who can get wickets. We lack bowlers to get wickets in the middle part. That is what we have to search for.”

Someone like Jasprit Bumrah, who removed the Sri Lanka openers to give him his 100th and 101st ODI wickets.

Mathews and Lahiru Thirimanne pulled Sri Lanka out of deep trouble with a stand of 124. Thirimanne made 53, and Mathews was defiant in possibly his last World Cup bat until the 49th over. He’d saved Sri Lanka. Until Sharma started batting.