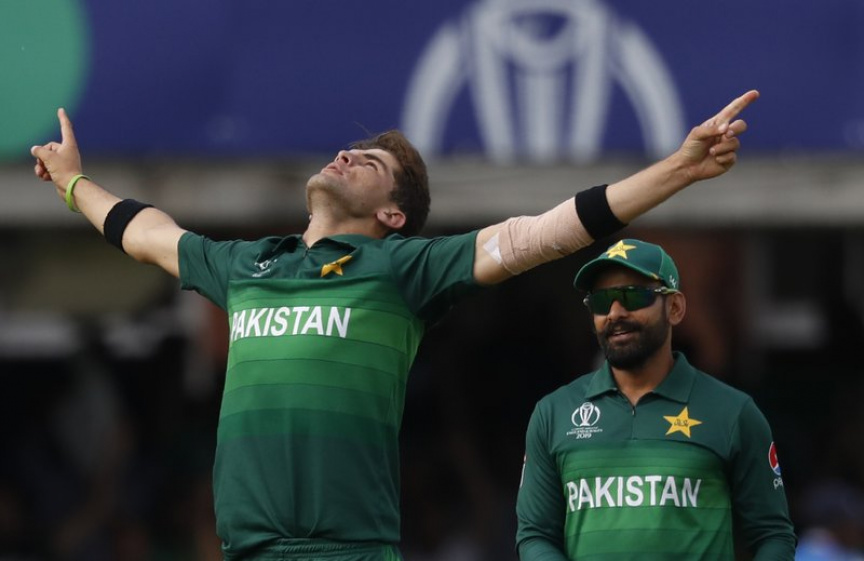 Pakistan's Shaheen Afridi celebrates after taking the wicket of Bangladesh's Mustafizur Rahman, his 6th wicket of the innings, during the Cricket World Cup match between Pakistan and Bangladesh at Lord's cricket ground in London, Friday, July 5, 2019. (AP Photo/Alastair Grant)

Pakistan beat Bangladesh by 94 runs at Lord’s for a fourth straight win and still missed out on the Cricket World Cup semifinals on Friday.

Going to the last four instead was New Zealand, a team Pakistan beat by six wickets in the final over last week.

Pakistan secured fifth place and finished on the same points as fourth-placed New Zealand. Both teams had five wins but the Black Caps advanced with a superior net run-rate.

“I do feel net run-rate needs to be looked at. One really poor game and you’re really battling to recover,” Pakistan coach Mickey Arthur said. His side rued losing its opener to West Indies by seven wickets after being dismissed for 105.

With the benefit of hindsight, Arthur added, “I’d like it to be number of wins and then head to head and then net run-rate in the future that determines places when points are level.”

Powered once more by the brilliant Shakib Al Hasan (64 runs in 77 balls), Bangladesh ended on 221 all out. The 19-year-old Shaheen Afridi swung the ball and took 6-35, the best figures by a Pakistan bowler in World Cup history, and the youngest bowler in tournament history to achieve a 5-for. He ended with 16 wickets in five matches.

Shakib finished his tournament with a total of 606 runs from eight innings, the third highest ever in World Cup history, behind India’s Sachin Tendulkar (673 in 11 innings) and Australia’s Matthew Hayden (659 in 10). Shakib averaged 86 runs.

“He’s been absolutely beautiful,” Bangladesh captain Mashrafe Mortaza said. “He has done what he could do ... I think he’s one of the best (World Cup) performances of all time.”

New Zealand joined Australia, India and England in the last four. Who meets who next week will be decided on Saturday.

The huge score Pakistan required looked unlikely despite a ton from opener Imam, who was out in rare fashion by hitting his own wicket two balls after his maiden World Cup century.

Babar hit 11 boundaries — four more than Imam — with three of them off Mustafizur in the 30th over. Babar was denied his second century of the World Cup when he fell to a yorker from Mohammad Saifuddin (3-77) that trapped him lbw. He failed with his review and it left Pakistan at 180-2 after 32 overs.

Pakistan captain Sarfaraz Ahmed retired hurt on 2 after being hit by a teammate but bravely returned for the last ball of the innings and hit a single to deny Mustafizur a hat trick.

Babar scored 474 runs in the group stage, a record by a Pakistan batter at a single World Cup. When he reached 60, he overtook Javed Miandad’s 437 total in 1992.

Despite knowing it wouldn’t advance, Pakistan was determined to finish with another win. It broke through in the sixth over when Soumya Sarkar (22) sent a delivery from Mohammad Amir (1-31) to Fakhar Zaman, who did well to catch low at point. It was Amir’s 17th wicket of the tournament with the score at 26-1.

But the wicket Pakistan really wanted came courtesy of Shaheen when Shakib tried to push the run rate on and a failed cut gave an easy chance behind to Sarfaraz to make it 154-5 and the game effectively over.

Bangladesh won three of its eight completed matches. It’s yet to reach a World Cup semifinal.

Mashrafe said he had enjoyed the all-play-all format of this edition.

“Playing each other, to know our strengths, to know our weaknesses, and how can we improve our game going forward, it’s (a) really very exciting tournament,” Mashrafe said.

Messi sent off as Argentina takes 3rd place at Copa