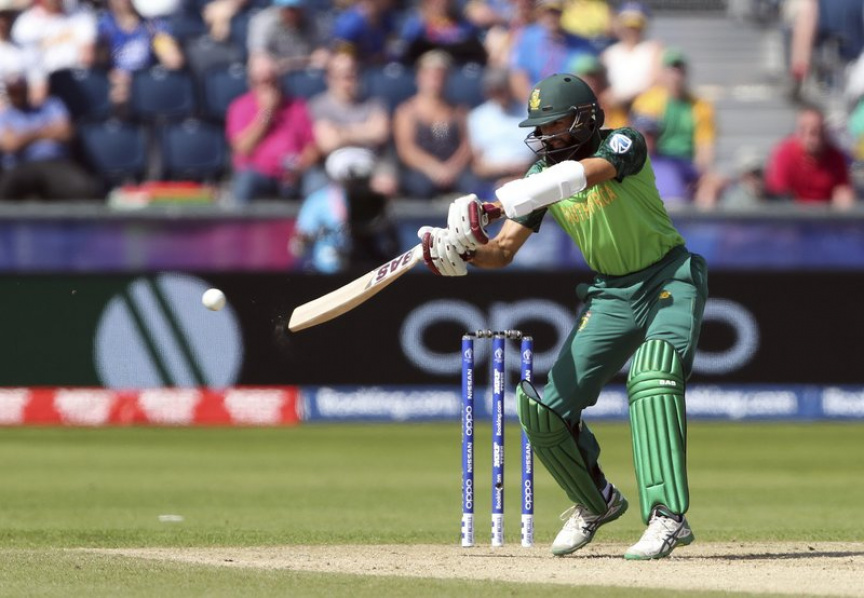 DURHAM, England (AP) — A week after an upset win over England that tilted the Cricket World Cup axis, Dimuth Karunaratne and his Sri Lankans were trounced by South Africa.

The South Africans were already out of semifinal contention, and their nine-wicket win on Friday seriously dented Sri Lanka’s chances of making the playoff stages, too.

There was a bit of a buzz for a while in the first of the tournament games at Durham, but it didn’t last long. A swarm of bees halted the game in the 48th over. All of the South African fielders, the Sri Lankan batsmen and both umpires went to ground, face down, to avoid any stings.

Once play resumed, Sri Lanka was quickly dismissed for 203.

South Africa lost only one wicket — Quinton de Kock (15) bowled by a trademark Lasith Malinga yorker — in coasting to victory with more than 12 overs to spare on a warm, sunny afternoon in England’s northeast.

“It’s a long time coming — we finally did ourselves justice,” du Plessis said in a post-game TV interview. “It feels bittersweet, it doesn’t feel like it means too much. But the basics of batting were shown — one big partnership and everything looks much easier.”

After posting his third half-century of the tournament, du Plessis drove the next delivery from Suranga Lakmal over temporary broadcasting scaffolding and out of the ground, forcing umpires to call for a used replacement ball.

Amla was on 68 when he was given out lbw to Jeevan Mendis and had just about walked off the field when his referral to the TV umpire showed the ball pitching outside leg stump, so he had to make his way back to the crease.

The South Africans had only one win in their first seven games, but with pressure off they played more like the team that had beaten Sri Lanka in 16 of their previous 18 ODIs.

Sri Lanka was coming off an upset win over England that changed the momentum of the tournament, exposing the hosts to the possibility of missing out on the playoffs.

A win would have moved Sri Lanka past Bangladesh and Pakistan to equal on eight points with fourth-placed England, but the bowlers were unable this time to defend a small total.

Malinga, who took four wickets last week as Sri Lanka defended 232-9 in the 20-run win over England, couldn’t get the same traction.

Paceman Kagiso Rabada (2-36) removed Karunaratne with a well-directed short ball that the Sri Lanka skipper could fend away only to du Plessis at second slip. That made Karunaratne just the second batsman dismissed on the first ball of a match in this tournament.

Sri Lanka recovered through a 67-run partnership between second-wicket pair Avishka Fernando and Kusal Perera, who both scored 30, before recalled allrounder Dwaine Pretorius dismissed them in the 10th and 12th overs.

Chris Morris (3-46) picked up the key wicket of Angelo Mathews, who scored an unbeaten 85 against England, when the allrounder was on 11 and dragged an attempted pull shot onto his stumps.

Pretorius, playing his first game since conceding 42 in seven overs and scoring 1 in South Africa’s opening loss to England, then dismissed Kusal Mendis (23) to return 3-25 from 10 overs, the most economical bowling figures so far at the tournament.

Sri Lanka can still reach the semis, but needs to win remaining group games against West Indies and India and rely on other results going its way.

“These are the sorts of things we need to think about and learn from,” he said, adding that his players were keeping their heads up. “We have two more (group) games — we have to win those two games.”

That’s West Indies on Monday and India the following weekend.