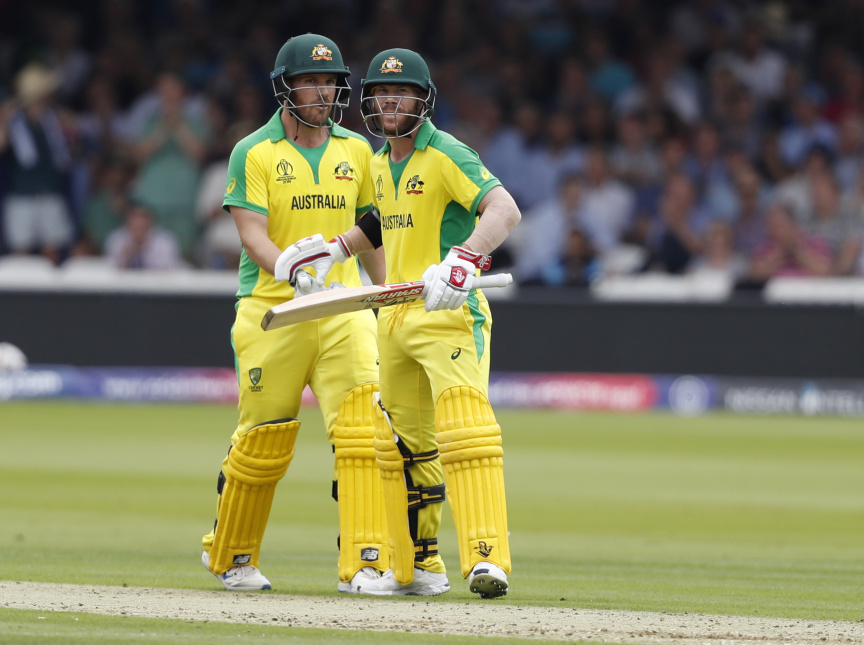 LONDON (AP) — Another century partnership, another day at the office for Aaron Finch and David Warner.

The best double act of the Cricket World Cup so far shared a record opening stand of 123 on Tuesday at Lord's, the launch pad Australia used to beat England by 64 runs and confirm a semifinals spot with two matches to go in the round robin.

Captain Finch made 100, his second century of the tournament, and Warner 53.

That's just the tip of the iceberg of remarkable numbers for Australia's opening combination.

They became the first duo to post a fifth consecutive 50-plus opening stand in a World Cup.

They have century stands of 146 against Pakistan, 173 against Sri Lanka, and the 123 against England.

They are averaging 91.71, making them the second most successful opening pair in World Cups after Upul Tharanga and Tillakaratne Dilshan, who averaged 100 for Sri Lanka in 2011 over nine innings.

Both openers have two centuries and have passed 50 five times.

Finch has tallied 496 runs, second in this tournament only to Warner's 500.

Before they got going on Tuesday, both had to endure a withering start from the England pace attack in humid conditions, including bruise-making strikes to their thighs.

Finch was particularly edgy in front of the hostile crowd. He gave a tough fingertips chance to James Vince in the sixth over, and survived a good lbw review by England in the seventh.

But once the new ball softened up, they took the fight back to England. Finch pulled too-short balls to the boundary and Warner saw off the three slips he was surrounded by early on.

Warner was out in the 23rd, taken aback by spinner Moeen Ali. His 53 came off 61 balls, and any boos for him from the crowd were drowned in cheers for Joe Root, who caught him at backward point.

Finch was out in the 36th over, a ball after reaching his 15th ODI hundred, and seventh against England. He lasted 116 balls and hit 11 boundaries and two sixes.

"To get out straight after a hundred is never ideal," Finch said. "I didn't play too badly. Any time you contribute to a win, that's the most important thing."

Batting conditions were challenging to begin with for the opening pair.

"It wasn't the easiest wicket to start on. The ball was moving for the seamer," Finch said. "We were conscious to get through that and were able to.

"There are teams that you have confidence playing against but I have had plenty of low scores against England as well. It was nipping around first thing, we were as tight as we could be and then took advantage of any width."

Finch and Warner clicked the first time they opened for Australia in ODIs. They combined for 163 in 2014 in a chase against England in Melbourne.

The two following innings didn't come close to those initial heights, but the home series was won early and Warner was rested.

They partnered up again to prepare for the 2015 World Cup and enjoyed enough big scores to enter that home tournament as the openers. Only, they didn't fire as they had. Their best partnership was 57, the only one over 30. Despite it, Australia still won a fifth World Cup.

They're on fire here, though, and are giving Australia the greatest base to win a record-extending sixth World Cup.