Govt. to construct additional units to house all rightful tenants of Hiyaa Project 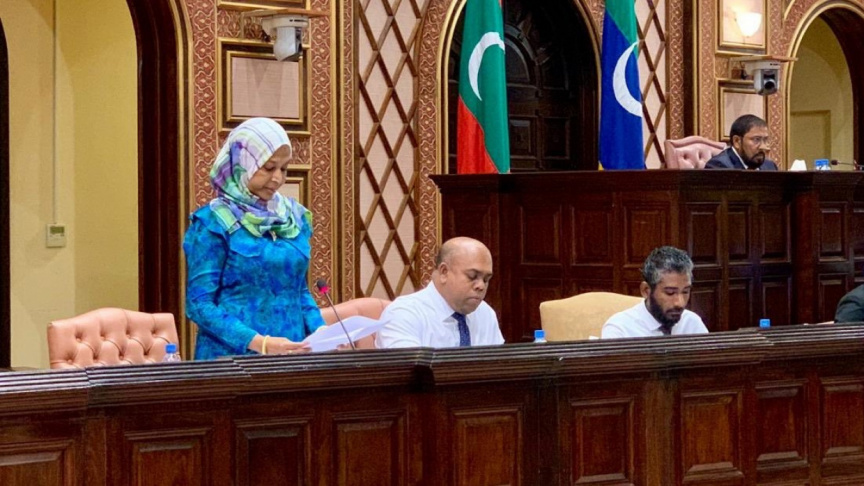 Minister of Housing and Urban Development, Athifa Shakoor at the Parliament on March 5, 2019. (Photo/People's Majlis)

The government plans on providing housing to all rightful tenants listed for the Hiyaa Social Housing Project even if it requires construction of additional housing units, says Minister of Housing and Urban Development, Athifa Shakoor.

Athifa was summoned for questioning at the Parliament regarding planned modifications to the Hiyaa Housing Project this Tuesday morning.

Speaking in answer to a question by South Maafannu MP Abdulla Rifau, Athifa said the units built under Hiyaa Housing Project were too small, and that the government was in talks with the contractor to enlarge the units.

Athifa said the government has made the decision to convert two-bedroom units to three-bedroom units without changing the building structure. The change will reduce the number of units to 3,588.

“Though the change will immediately reduce the number of housing units, the government will construct additional buildings to provide housing to all eligible and rightful tenants awarded housing under this social housing project,” said Athifa.

She noted that the Ministry of Housing and Urban Development continued to receive multiple complaints over the Hiyaa Housing Project, all of which are being forwarded to the presidential committee charged with investigating issues related to State housing projects.