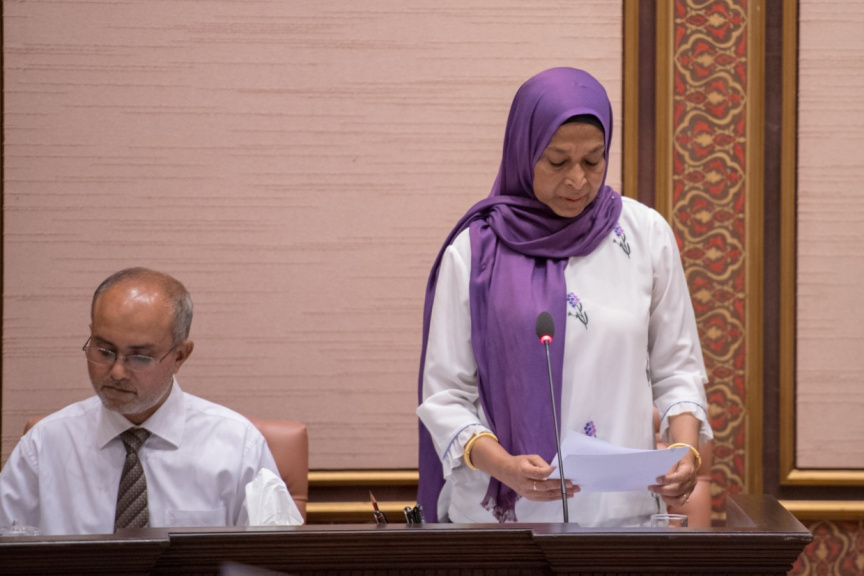 Minister of Housing and Urban Development, Aminath Athifa Shakoor responds to questions by the Parliament regarding state housing units in the atolls on July 22, 2019. (Photo/People's Majlis)

Housing Minister Aminath Athifa Shakoor says several of the state housing units in the atolls are in a state of derelict due to lack of maintenance.

Minister Athifa was summoned by the Parliament this Monday morning in response to a request for questioning filed by Vilufushi MP Hassan Afeef.

Afeef made the request to obtain a response from the Housing Minister regarding the suspension of the construction of 64 housing units in Vilufushi.

Athifa informed the Parliament that construction of over 1,450 housing units in the atolls are currently at a standstill.

“Though construction work is complete in some of the locations, it lacks basic services to make it fit for human inhabitation. And since some of the locations were left without anyone to look after its maintenance, many of the housing units are in a state of derelict,” said Athifa.

She said the Housing Ministry was working on repairing the housing units which have fallen into ruin within the available budget.

Athifa added that quality control was a top priority by the current administration in construction of housing units.

“The biggest issue which arises with such housing units is the additional repairs which need to be carried out to prepare it for inhabitation by tenants due to lack of quality control,” she said.

Athifa: Housing will be awarded to all rightful tenants